A New Word Association Test for Norwegian: Implications for Theories on the Mental Lexicon and on Language and Ageing 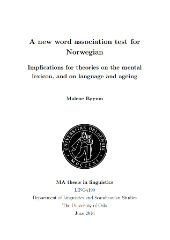 This thesis investigates on how data from a new word association (WA) test for Norwegian may shed light on theories on the mental lexicon, and on language and ageing.

A new WA test for Norwegian was developed, based on the methodology of Fitzpatrick et al. (2015). The WA test consists of 100 cue words, and the participants were instructed to write the first word that came to mind for each of them. WA data was collected from 173 participants from two age cohorts: 20-30 year olds (n=122), and over 60 year olds (n=51). Norms lists were compiled for both cohorts.

Comparisons of the word associations from the two cohorts show clear differences between the age groups, both in the norms lists, and in the response category patterns. The results suggest that the observed age-related differences are best explained as a combination of generational effects and age-related changes in WA strategies.

Further, the thesis aimed to explore how the collected WA data might shed light on, firstly, theories of the mental lexicon and, secondly, theories on language and ageing. A cognitive linguistic approach was adopted for the study. Analyses of the collected data found both inflected forms of words, and multi-word units in the responses. Responses were given on all levels of representation (i.e. meaning, position, and form), and there was much individual variation in the responses. These findings support a non-modular view of language, where linguistic knowledge is organised in a network. The findings also support the role of experience in usage-based theory. Further, significant differences were found between noun cues and verb cues, supporting the fundamental difference between nouns and verbs that is postulated in cognitive grammar.