University administrators as forced language policy agents. An institutional ethnography of parallel language strategy and practices at the University of Copenhagen 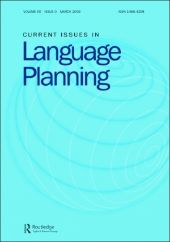 Nation states increasingly assign the responsibility for meeting the global competitiveness agenda to the universities themselves [Cirius, 2009, Mobilitetsstatistik for de videregaaende uddannelser 2007/08 [Mobility statistics for higher education 2007/08]]. In Denmark, universities that have introduced English as an instrument to facilitate internationalisation are called post-national(-ising) [Mortensen & Haberland, 2012, English: The new Latin of academia? Danish universities as a case. International Journal of the Sociology of Language, 216, 175–197]. The present article questions this assumption by outlining results from an institutional ethnographic study of internationalisation at the University of Copenhagen, where national agendas like the preservation of the Danish workplace culture and developing and protecting the status of Danish are very much present. In line with authors who have analysed internationalisation at Danish universities as an uneven and differentiated process due to the counter discourse of immigration prevailing on the Danish labour market [Valentin, 2012, Caught between internationalization and immigration. Learning and Teaching, 5(3), 56–74; Mosneaga & Agergaard, 2012, Agents of internationalisation? Danish universities’ practices for attracting international students. Globalisation, Societies and Education, 10(4), 519–538], my study reveals that internationalisation at a national university in Denmark is a contested field where the conflicting language regimes [Cardinal & Sonntag, 2015, State traditions and language regimes: Conceptualizing language policy choices. In L. Cardinal & S. Sonntag (Eds.), State traditions and language regimes (pp. 3–28). McGill-Queen’s University Press] of internationalisation (favouring English) and immigration (favouring Danish) clash, complicating the linguistic organisation at UCPH [Tange, 2012, Organising language at the international university: Three principles of linguistic organization. Journal of Multilingual and Multicultural Development, 33(3), 287–300]. While using English was regarded as the primary means of solving internationalisation-related challenges by the Danish staff, for the foreign staff, English obscured rather than facilitated their understanding of the Danish workplace culture and university administration, which was their primary internationalisation-related concern.

Access the article on the homepage of Language Planning.