The acquisition of long consonants in Norwegian 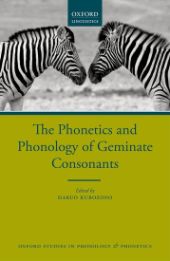 This study investigates the acquisition of the V:C vs VC: contrast in (Urban Eastern) Norwegian for sonorants and voiceless plosives. We find that by 2;6 years children already differentiate between these structures in their own productions, and do so most reliably through proportion of vowel duration in the rhyme (V/VC), with values close to the adult target, even while both vowels and consonants are much longer than in adult speech. By age 6, increasing phonetic fluency in the inter-gestural co-ordination of connected speech brings about an apparent regression in development, as children reduce certain segmental durations either too much or too little in the overall goal of increasing speed and fluency. The resulting distortions in phonetic mapping undermine the signaling of localized temporal relationships that had already been acquired. As in adults, the contrast signaling varies according to consonant manner: in sonorants the contrast is marked by variation in both V and C duration, and in V/VC; in voiceless stops, the contrast is subtler and only marked by V and V/VC. The relative complexity of temporal relations for stops is discussed, with competing demands of length and phonological voice. The temporal relation between vowel and consonant duration is the most systematic marker of the contrast, rather than contrastive duration in either the consonant or vowel alone. Finally, we find evidence for preaspiration as a possible secondary cue to long stops, present also in the earliest stages of child speech investigated and hitherto unreported for this variety of Norwegian.

Access the chapter on the homepage of Research Gate.