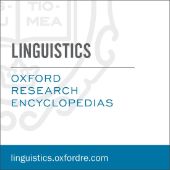 The linguistic landscape (henceforth LL) has proven to be a fruitful approach for investigating various societal dimensions of written language use in the public sphere. First introduced in the context of bilingual Canada as a gauge for measuring ethnolinguistic vitality, in the 21st century it is the focus of a thriving field of inquiry with its own conference series, an increasing number of publications, and an international journal dedicated exclusively to investigating language and other semiotic resources used in the public arena.

The scholarship in this domain has centered on European and North American geographical sites; however, an increasingly voluminous share of studies addresses the LL of sites across the world through both books and articles. African contributions have added an important dimension to this knowledge base as southern multilingualisms bring into question the very concept of language in that speakers and writers draw on their rich linguistic repertoires, avoiding any compartmentalization or separation of what is traditionally conceived of as languages.

The LL of Ethiopia has contributed to this growing base of empirical studies in the exploration of language policy issues, identity constructions, language contact, and the sociolinguistics of globalization. A new language policy of ethnic federalism was introduced to the country in the 1990s following a civil war and through a new constitution. This policy was set to recognize the various ethnolinguistic groups in the country and the official use of ethnic/regional languages to satisfy local political and educational needs. Through this, languages previously unwritten required a script in order for speakers to communicate in them in written texts. And many regions have chosen the Latin script above the Ethiopic script. Nonetheless, some languages remain invisible in the public sphere. These events create an exciting laboratory for studying the LL. Given the change of language policy since the late 20th century and the fast-growing economy of Ethiopia (one of the poorest countries on the continent) the manifest and increasingly visible display of languages in the LL provides an excellent lens for studying various sociolinguistic phenomena.

Access the article on the homepage of Oxford Research Encyclopedia of Linguistics.