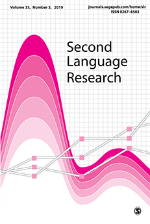 The Bottleneck Hypothesis (Slabakova, 2008, 2013) proposes that acquiring properties of the functional morphology is the most challenging part of learning a second language. In the experiment presented here, the predictions of this hypothesis are tested in the second language (L2) English of Norwegian native speakers. Two constructions are investigated that do not match in English and Norwegian: One involving functional morphology, subject–verb (SV) agreement, which is obligatory in the L2 but non-existent in the first language (L1), and one involving syntax, verb-second (V2) word order, which is obligatory in the L1, but restricted to specific contexts in the L2. The results of an acceptability judgement task indicate that the participants struggled more with identifying ungrammatical SV agreement than ungrammatical word order. We conclude that the findings lend tentative support to the Bottleneck Hypothesis.

Read more on the homepage of Sage Journals.