UiO Faculty of Humanities Center for Multilingualism in Society across the Lifespan
Main navigation
Back to uio.no
Sub navigation Menu
Publications > 2019 > Variation in language mixing in multilingual aphasia 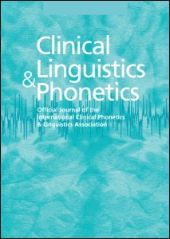 Mixing languages within a sentence or a conversation is a common practice among many speakers of multiple languages. Language mixing found in multilingual speakers with aphasia has been suggested to reflect deficits associated with the brain lesion. In this paper, we examine language mixing behaviour in multilingual people with aphasia to test the hypothesis that the use of language mixing reflects a communicative strategy. We analysed connected language production elicited from 11 individuals with aphasia. Words produced were coded as mixed or not. Frequencies of mixing were tabulated for each individual in each of her or his languages in each of two elicitation tasks (Picture sequence description, Narrative production). We tested the predictions that there would be more word mixing: for participants with greater aphasia severity; while speaking in a language of lower post-stroke proficiency; during a task that requires more restricted word retrieval; for people with non-fluent aphasia, while attempting to produce function words (compared to content words); and that there would be little use of a language not known to the interlocutors. The results supported three of the five predictions. We interpret our data to suggest that multilingual speakers with aphasia mix words in connected language production primarily to bypass instances of word-retrieval difficulties, and typically avoid pragmatically inappropriate language mixing.

Read more on the homepage of Clinical Linguistics and Phonetics