UiO Faculty of Humanities Center for Multilingualism in Society across the Lifespan
Main navigation
Back to uio.no
Sub navigation Menu
Publications > 2020 > Cross-linguistic variation in word-initial cluster production in adult and child language: evidence from English and Norwegian

Cross-linguistic variation in word-initial cluster production in adult and child language: evidence from English and Norwegian 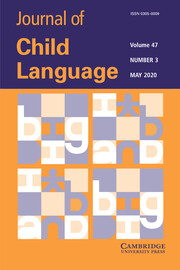 Young children simplify word initial consonant clusters by omitting or substituting one (or both) of the elements. Vocalic insertion, coalescence and metathesis are said to be used more seldom (McLeod, van Doorn & Reed, 2001). Data from Norwegian children, however, have shown vocalic insertion to be more frequently used (Simonsen, 1990; Simonsen, Garmann & Kristoffersen, 2019). To investigate the extent to which children use this strategy to differing degrees depending on the ambient language, we analysed word initial cluster production acoustically in nine Norwegian and nine English speaking children aged 2;6–6 years, and eight adults, four from each language. The results showed that Norwegian-speaking children produce significantly more instances of vocalic insertions than English-speaking children do. The same pattern is found in Norwegian- versus English-speaking adults. We argue that this cross-linguistic difference is an example of the influence of prosodic-phonetic biases in language-specific developmental paths in the acquisition of speech.

Read more on the homepage of Cambridge University Press.