UiO Faculty of Humanities Center for Multilingualism in Society across the Lifespan
Main navigation
Back to uio.no
Sub navigation Menu
Publications > 2021 > Dead, but Won’t Lie Down? Grammatical Gender among Norwegians

Dead, but Won’t Lie Down? Grammatical Gender among Norwegians 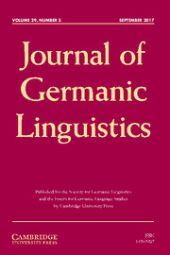 This paper examines grammatical gender from the sociolinguistic perspective. The question pursued is to what extent exponents of grammatical gender are tied indexically to identity categories. Building on literature and corpus data, I claim that within the Norwegian context, grammatical gender is associated with sociolinguistic dimensions such as the urban/rural distinction, political views, class, ethnicity. The traditional three-gender system is being replaced by a two-gender system in several dialects, resulting in the loss of the feminine gender. Indexical values associated with the feminine gender features are still valid, though, and some forms take on new pragmatic functions. Once grammatical gender is viewed through a sociolinguistic lens, with the agency of speakers being recognized, it becomes clear that it may not be fully understood without taking into account the context of interaction at a micro-level, and the sociohistorical characteristics of—for instance—regions with language contact at a macro-level.*