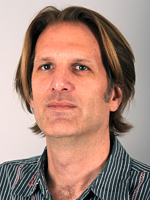 B.A. Cornish College of the Arts.  Department of Music.

Jazz in the Time of the Novel: The Temporal Politics of American Race and Culture. University of Alabama Press, 2013.

Trading on Racial Futures: Financial Speculation, the American Novel, and the Construction of a Usable Future.

Bruce Barnhart is Associate Professor of American literature and co-director (with Tina Skouen) of the project Literature, Rights, and Imagined Communities. He is also co-director (with Marit Grøtta) of the Temporal Experiments research group.

Barnhart’s engagement with the question of rights comes primarily from his interest in the connection(s) between property rights and racialized notions of personhood.  In his book, Jazz and the Time of the Novel, he investigates the connections between the temporality of different aesthetic forms and the dependence of traditional forms of property rights on the temporality of expectation and exclusion.  He continues to pursue his investigation of different literary and musical practices as both critiques of existing forms of temporality, personhood, and rights, and as models of alternative social and intellectual forms.

Barnhart has published work on the Harlem Renaissance, the temporality of the novel, jazz, and the early civil rights figure James Weldon Johnson.  He is currently at work on a book entitled Trading on Racial Futures, an examination of the ways in which American novels and economic practices construct different versions of a usable future.  The book focuses on the temporality of racial and cultural politics, and on the ways in which the logic of financialization creates proprietary rights in future holdings that stand in the way of more substantive conceptions of civil and economic rights.