Harry Potter is a goodie bag for the soul

The quest for spirituality is a feature of contemporary society. But we no longer believe in the one true religion. We make up our own metaphysical pick and mix. Harry Potter is just such a mix.

What is it about J. R. R. Tolkien’s Lord of the Rings trilogy and J. K. Rowling’s Harry Potter series that has made them the most popular fantasy books ever written? Could it have something to do with the values the books are based on?

These were some of the questions that Lykke H. A. Guanio-Uluru asked herself when she started working on her doctoral dissertation.

“My starting point was to see these texts more as a phenomenon than as a genre,” explains Guanio-Uluru.

“With them having proved to be so enormously popular, the natural conclusion is that these texts must resonate with contemporary audiences somehow. They have to tell us something about present-day society, and about us and our values.”

“Yes, I believe they do. Among other things, they say something about the complexity of the modern world; that we live in a globalized, multi-cultural and secular society, in which our search for spirituality is constantly changing. It is a feature of our time, at least in the western world, that we are a bit like wizards ourselves. We create our own view of the world. We take a bit from here and a bit from there, and make up our own religion. This is  something that is also found in Harry Potter.”

That is why these works have such an impact on us, Guanio-Uluru believes. But it is not the only reason.

“Their form is also closely associated with their symbolic content. That gives these texts a powerful driving force.”

Interplay between aesthetics and ethics

Using rhetorical analysis and ethical theory, Lykke Guanio-Uluru has found a new way of understanding the interplay between aesthetics and ethics in the texts. The key archetypal symbol in each text also says something important about the text’s fundamental values, she argues. 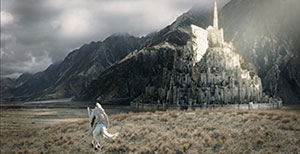 Film still from The Lord of the Rings: The Return of the King (© 2003 Fox-Warner)

This connection between ethics and aesthetics, the symbolic as the driving force of the texts, is her most exciting find, according to Guiano-Uluru.

“The tree is thematically important in The Lord of the Rings. The Ents, ancient shepherds of the forest, fight against the wizard Saruman, who represents evil. The tree also links the story as a whole, binding together different cultures and epochs with repeated references to the mystical White Tree of Gondor. Roots and continuity are also clearly valued elements in the text.

The Silmarillion, Tolkien’s account of the elder days of the history of Middle-earth, is the premise that lies behind the use of the tree as symbol in The Lord of the Rings, explains Guanio-Uluru. According to The Silmarillion, the source of light in Middle-earth is trees.

“And the story quite literally branches out. It stretches back and has offshoots going in different directions. The narrative structure resembles that of a tree.”

“Was that the author’s intention?”

“It’s difficult to say. I have wanted to have an open mind in relation to the text. But I discovered in a letter that Tolkien himself wrote, for instance, that he was very fond of trees.”

It is also interesting that Tolkien includes the tree both as a subject, as in Norse mythology, and as an object, as in Christian tradition and faith.

“The mystical tree binds the different worlds together. The tree is a cross-cultural symbol, that is also found in eco-philosophy.”

Lykke Guanio-Uluru believes that both series of books, Harry Potter and The Lord of the Rings, function as platforms for conversations about ethical values. 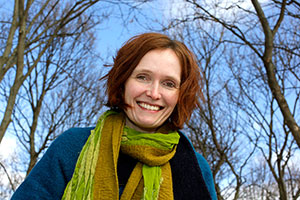 Lykke H. A. Guanio-Uluru is the author of the doctoral thesis Best-selling Ethics: A Literary Analysis of Ethical Aspects of J.R.R. Tolkien’s The Lord of the Rings and J. K. Rowlings’s Harry Potter series. (Photographer: Terje Heiestad)

“In Harry Potter, the archetype of the shape-shifter is key. Magical transformations are a recurrent theme. The characters can be bewitched. A metamorphosis also occurs with Harry, who goes from a state of ignorance to becoming virtually all-knowing.”

There is also an alchemical structure when it comes to form and ethics.

“In terms of narrative technique, the text moves from being a fantasy story for children towards becoming  a complex novel. The text is also full of religious symbolism, and can be labelled an ethical hybrid. There are many Christian symbols. At the same time, the characters steer their moral choices according to a system of ethics where the end justifies the means.”

Harry Potter contains multiple layers of codes, Guanio-Uluru points out. The text can therefore be read in many different ways.

“It’s particularly interesting to see how the final volume undermines the ethics of the earlier books. Like the wisdom of Dumbledore. It gradually emerges that Dumbledore was not so wise after all. He was just an ordinary human being, struggling with the same problems as the rest of us. ”

“Everything is in a process of change. This is the globalized society, where we, too, operate in multiple worlds.”

“Fantasy literature has been generally frowned upon in academic circles,” says Guanio-Uluru.

“Most analyses of these works have been rather simplistic. I wanted to take this literature more seriously, to examine it on its own terms.”

Tolkien’s and Rowling’s texts are different in many ways.

“In terms of their values, and how these are communicated, the works are more different than alike. But they do appear to share a certain kind of dynamic.”

Both series, however, represent what Guanio-Uluru calls best-selling ethics.

“They bring together readers from all age groups and offer them a shared, mythical universe that they can all talk about. You could call them key cultural texts.”