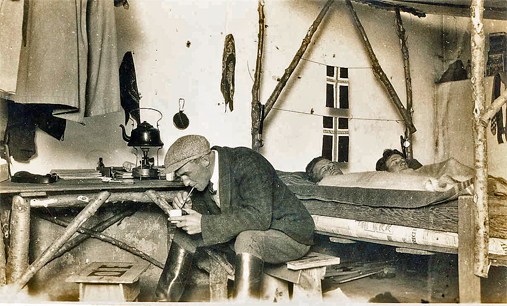 Olav Gjøvdal is sipping yerba mate from a straw. The emigrants drank this traditional South American tea-like drink to avoid scurvy as a result of the meat-rich diet. Ottar Enger (middle) and Ole Viborg Høiby are laying on the bed. (Photo: private)

While hundreds of thousands of Norwegians emigrated to the United States in the years from 1820 to 1940, only some 20 000 chose Latin America. A new book has uncovered more knowledge about these Norwegian emigrants.

‘Argentina is not El Dorado, as we believed and so many others still believe,’ Ottar Enger wrote home to his family in Rjukan in 1927.

The 23-year-old craftsman had left Norway accompanied by 30-year-old Ole Viborg Høiby. Before leaving, they had read that March was a good time to arrive in Argentina, since this was the harvesting season on the pampas, the fertile plains around Buenos Aires.

But when they arrived in March, the harvest was already finished. A Norwegian church minister to seamen helped them find work on a farm where there was a Norwegian foreman.

The pay was low, however, and the work was arduous. No more than a couple of months later, a letter from Ottar Enger revealed that things had failed to meet their expectations.

‘We are wondering whether the stories of unsuccessful emigration have been undercommunicated,’ says Steinar Sæther, associate professor at the Department of Literature, Area Studies and European Languages, University of Oslo.

In 2011, Sæther and his colleagues started digging into the stories of Norwegians who chose to emigrate to Latin America at a time when hundreds of thousands set off for North America. Many of the stories that they found, and that are retold in the book “Expectations Unfulfilled: Norwegian Migrants in Latin America 1820–1940”, feature emigrants who met with disappointment.

‘From North America we tend to hear positive stories, although even there some people died, disappeared or came home penniless. We have seen that many of the stories from Latin America tell of such outcomes, although exceptions can be found,’ Sæther says.

The researchers have read letters, diaries and memoirs sent to them by viewers and listeners after Sæther presented the newly initiated project on Norwegian radio and TV in 2011. They received so much material that Sæther still has pangs of conscience that he was unable to answer everybody.

The response was valuable and has been the researchers’ main source, in addition to the National Archives, Latin American archives and the Internet.

While approximately 800 000 Norwegians went to North America in the years from 1820 to 1940, only 10–20 000 chose Latin America as their destination. Also, while entire families and communities travelled to the USA, often on large passenger ships, it was mostly young, single men who chose Latin America. Only 15–20 per cent were women.

‘Many of those who emigrated to Latin America went on merchant ships. Partly because it was easier – they could go directly from Kristiansund to Santos in Brazil – and partly because it was cheaper in some cases. Some chose to work their passage across the ocean. They generally envisaged staying there for a few years to save money before returning home.’

The objective of migration was thus quite different for those who went to Latin America, compared to those who came to the USA. This may be connected with the time of their departure: the major wave of emigration to the USA took place in the years from 1860 to 1880, when families went over in search of land.

Much of the emigration to Latin America happened in the inter-war period. This was also the time when Ottar Enger and Ole Viborg Høiby set out on their journey. They both left Norway in 1927.

Earning just enough for the passage

Ottar and Ole described their experiences in diaries and letters to their kin at home in Norway. The researchers have been granted access to both diaries, but only to Ottar’s letters. The story of these two is one of several recounted in the book, in a chapter written by Professor Maria Bjerg from the Universidad Nacional de Quilmes in Argentina.

Slowly, Ole and Ottar’s dream of earning lots of money faded. A couple of months after their arrival, Ottar wrote to his family that Argentina certainly was no El Dorado, and that it was the last country that Norwegians should consider going to.

After six months of work on the farm, the two were frustrated. Their pay was far below what they had expected, and the work was arduous. They decided to try their luck with some Danish landowners further south in the province.

The never got there, however, because on the way they met a Norwegian engineer who told them that there was work to be found in the railway construction projects in the north of the country. After their encounter with the engineer the two men travelled thousands of kilometres northwards, only to discover that finding work was not as easy as they had been led to believe.

‘The two of them ended up working for an American oil company in the far north of Argentina, near the border with Bolivia. They made good money there. Ottar, however, became increasingly homesick. At the same time, a political conflict broke out in the oil company, and they lost their jobs. When returning to Buenos Aires a little more than a year after their first arrival there, they had barely enough money to pay for the passage back home,’ Sæther recounts.

Norwegians who travelled to Latin America tended to favour Argentina, Southern Brazil, Uruguay and Chile. There are thousands of stories, but Sæther believes that the story of these two men is an example of a tendency that may explain the low number of emigrants who chose this part of the Americas.

‘Word of unsuccessful trips to Latin America got around, and emigrants discouraged Norwegians from going there. We believe that such informal information was extremely important. In the mid-1800s there had been a number of positive reports, but in the 1920s the main tendency had changed completely,’ Sæther explains.

But what was it that drove people to leave? Was it only a desire to make money, or were there other dreams that beckoned? Although a lot of the material appears to reflect that money was the emigrants’ main motivation, the researchers have seen that many of those who left home but later returned portray themselves as adventurers.

‘This presents us with a problem of interpretation. Were they really adventurers, or did they later write this to justify a journey that had turned out to be less profitable than they had expected? We cannot know for sure,’ Steinar Sæther concludes. 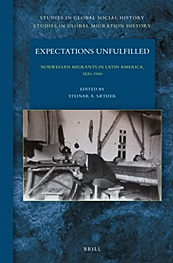 Read this book for free