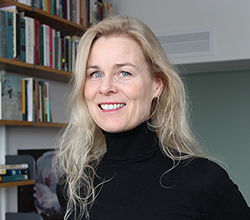 Does one necessarily have to spend lots of time to produce a good book? In the seventeenth century, most writers and critics felt this was true – and it is also a widely held belief today, says Associate Professor Tina Skouen in the University of Oslo's Department of Literature, Area Studies and European Languages.

Skouen’s monograph on The Value of Time in Early Modern English Literature was recently published by Routledge.

In her book, she looks at how British writers dealt with various time constraints in the period from 1580 to 1730.

– It's fascinating to observe how authorship was defined in this period when the print industry was gradually taking the place of rhetoric in regulating writers’ activities, Skouen says.

Authors in this period were in a bit of a pinch: on the one hand, they responded to some ideals from the classical period that involved spending plenty of time on revision. Haste makes waste. It was important that one should polish for perfection in a leisured tempo. On the other hand, this ideal was constantly being put to the test, not least because of developments in the book industry.

In other words, concern with lack of time isn’t just a contemporary phenomenon.

– We tend to think that people in the past didn’t worry as much about time, but their subjective experience of time may actually sound quite similar to ours. These authors all sound very modern when they complain about not getting enough done, says Skouen.

The problem of time also affected readers. The idea that some texts deserve to be read slowly and repeatedly first emerged in antiquity, but as the printing industry spread rapidly throughout Europe in the Renaissance and further into the seventeenth century it became more important to make a qualified selection. The situation was perceived in terms resembling what we call “information overload” today.

In her book, Skouen focuses on how authors chose to present themselves in print by references to time and haste.

– I don’t really write that much about time as a literary theme, but instead I look at how the projected self-images typically created an impression of either slowness or hurriedness. To resist immediate publication was associated with high literary prestige.

Skouen was struck by how often the issue of time was mentioned in the prefaces to various types of literary publications. The writers usually apologize for not having been able to spend as much time as they would have liked.

But were they really that busy? Can we take these complaints at face value?

– The obvious answer is that, yes, they did become busier than before. We see the emergence of a capitalist mindset, with a highly synchronized and rapid book production. At the printing house, there were rules against sloppiness and late-coming, she explains.

Yet, the authors' attitude does not appear to relate only to publishing pressures and shortness of time.

– I try to demonstrate that they were victims of conflicting pressures between, on the one hand, the material factors relating to writing for publication and, on the other, the classical ideals about how to write. My project combines book history with the history of rhetoric in a way that no one has done before.

Skouen's book project, The Value of Time in Early Modern English Literature, has been funded by, among others, the Norwegian Research Council’s KULVER project, a research programme on assigning cultural values.

– The early modern understanding of what it meant to be an author was linked to some principles deriving from classical rhetoric and poetics. The Roman poet Horace (65 - 8 BCE) recommended that one should wait nine years before releasing one’s work, a rule that few if any managed to live up to, not even Horace himself. The author was to be like a smith in a forge, with the pen as his hammer, battering away at every sentence. The only consolation was that practice makes perfect. The Roman rhetorician Quintilian (c. 35 - 100 CE) believed that with years of training, one would gradually learn to produce good writing at the highest possible speed, Skouen says.

In seventeenth-century England, you could pretend to have composed something quickly and spontaneously by divine inspiration, but it would still be considered important to polish and revise afterwards. It was said about John Milton that the first thing he did in the morning was to dictate scores of verses that had come to him during the night. He would then spend the rest of the day refining the text until he was left with a line that might stand the test of time. This account of how Milton worked served to create an impression that Milton was of the same calibre as the Roman poet Virgil, who was reputed to have used the very same method.

Haste makes waste, and rashness was considered a moral sin. When someone was accused of being a speed writer, he was potentially not only a bad writer but a bad person too.

The only exception would be if the writer was aiming to make the readers turn to God. Skouen has studied a wave of conversion manuals that were huge bestsellers in the late sixteenth century.

– Judgement Day could come at any moment, and turning to God at once was imperative. Each individual had to be ready, always. There was no time to lose here, Skouen points out.

In the afterword to her book, she addresses some ongoing debates about time pressures in contemporary literature and society.

– We still have many examples today that speed writing is regarded as incompatible with literary quality. In Norway there is an ongoing discussion about the criteria for admittance to the prestigious Authors' Union. To become a member, you have to be the author of at least two literary works, but you shouldn’t have published too many books either. This became clear when the popular Norwegian romance writer Frid Ingulstad was denied membership in the 1990s. When something appears mass-produced, it is generally considered not as a work of art but as a commercial product. An alternative authors’ association is now being established in Norway, and they have promised not to include “literary value” among their criteria of evaluation.

The value of time

The notion that time equals quality tends to pop up in book reviews.  When Karl Ove Knausgaard began on the My Struggle series, he made a decision to produce ten pages a day. The first two novels were very well received in Norway, but as the project progressed, the same reviewers that had hailed his books started to grumble. They felt that his swift tempo had a negative impact on the quality of his work.

– One will often see literary critics referring to the amount of time supposedly spent by the writer or reader. If an author is known to have withdrawn for several years before releasing his latest novel, this will usually be mentioned as something positive. And if the book is said to deserve a slow reading, then it means that it is really good. These types of remarks serve to indicate the literary quality.

We still have this idea in our contemporary society that we need to slow down. There is now a slow movement, with slow food, slow cities, and in Norway even slow TV and slow cross skiing. But is the slow pace necessarily any better or more valuable than the fast one? Tina Skouen is not so sure.

– Of course, there is a limit as to how fast you can write before you start messing things up. Most will probably agree that you can get a better result by investing a little more time. Nevertheless, I feel that there is something pretentious about the whole slow movement. It can sound a bit snobbish when someone insists on the value of slow reading or when people talk about how important it is for them to be able to sit down with a good book for hours. I am a very fast reader myself, and I really don’t think I benefit any less from what I read or appreciate it any less because of that.

By Toril Haugen
E-mail this page