Myths about Language in the Middle Ages (completed)

Myths can increase our knowledge of how medieval intellectuals sought to bolster the authority of their respective languages for higher cultural, literary, and administrative functions. 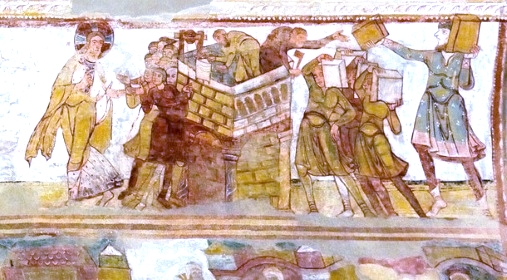 In medieval Europe, those who wished to defend the use of their native language often did so by presenting a myth about its origin. They argued that their particular language was the best of all that had been present at the Tower of Babel, or that the pagan gods had spoken their language, or that a particular Church Father had translated the Bible to their idiom.

The importance of such narratives to the emergence of the vernaculars has, however, passed largely unnoticed in modern research. A study of medieval myths about language promises to enhance our understanding of the evolution which would eventually result in the full functional scope of the modern European languages. This is of particular importance since the Middle Ages was the formative period for developing the vernaculars languages into workable tools for all levels of discourse, a necessary prerequisite for our modern society.

Myths are promising sources for understanding how medieval authors themselves conceptualized what they were doing when they used their own language for literature and scholarship, something which we today take for granted but which was a controversial proposition at the time. The project Myths about Language in the Middle Ages will also address the issue of how myths can serve as explanations by presenting concrete narrative about the abstract entity of language. Based on perspectives developed within linguistics, a theoretical framework will be worked out which allows for a focused analysis of myths, but also of images, as a means to explain abstract entities in terms of concrete narrative or of pictorial motifs.

The primary objective of this project is to investigate how myths about languages were used in the Middle Ages in order to explain what individual languages were, what their place in history was, and how they could be used. These myths were an important element in the emergence of the vernaculars, and thus to the socio-linguistic makeup of modern society, but they have not yet been studied comprehensively. The project will address this gap in modern research, both through a full overview of the medieval evidence in collaboration with specialists worldwide and through a separate, focused study of Ireland and Iceland, conducted by the project leader.

The secondary objective is to develop a theoretical framework which can assist in the analysis of complex clusters of signifiers, and to test the theory against both narrative and pictorial sources. The basic theory is imported from linguistics, and will here be adapted to account for sources where many additional criteria are involved.

The project leader and research group will produce an ambitious anthology called Language Myths in the Middle Ages c. 400–1400. The project leader will write the monograph Insular Influence on Old Norse Literature c. 850–1200, as well as two articles. The PhD Fellow will produce a PhD thesis, and the Postdoctoral Fellow a monography or at least three major articles. Two conferences will be arranged at the University of Oslo, as well as panels on major medievalist Conferences.

The project will study these developments in Europe at large, and the project leader will here collaborate with a team of 15 international specialists to cover the many languages and literatures involved. The project leader will himself conduct a focused study of Iceland and Ireland, where myths about language were used in particularly creative ways.

This is the inaugural conference of the project ‘Myths about Language in the Middle Ages’. The project adopts a comparative perspective on the important but understudied topic of medieval myths about language.

All across Europe, people told myths about their language in order to describe its place in the world. They did so to understand its origin and character, but also to argue that their native language was an equally worthy medium of literature as the dominant languages, such as Latin. These myths are rarely studied, but they were a crucial component in the development of the languages of modern Europe and beyond.

Rita Copeland and Albert Russell Ascoli will serve as respondents during the conference.

The Dating of Old Norse and Celtic Texts

During recent decades, the focus of attention of many medievalists has shifted from the production to the reception of texts. The author and original context of composition have faded into the background and relativistic perspectives have dominated. The fact remains, however, that texts cannot be received without first being produced, and attempting to uncover the circumstances under which a text first came into being is certainly a worthwhile scholarly endeavor, at least in cases when useful criteria for dating, contextualization or attribution can be found.

During the period when a focus on reception has prevailed, methodologies for dating have developed, and old questions regarding production can now be revisited in order to give more secure, precise and to some extent different answers. For linguistic and metrical reasons, Old Norse and Celtic philology are especially promising fields for renewed attempts at dating early texts, and with this conference, we wish to exchange ideas and experiences from ongoing work within the two disciplines.