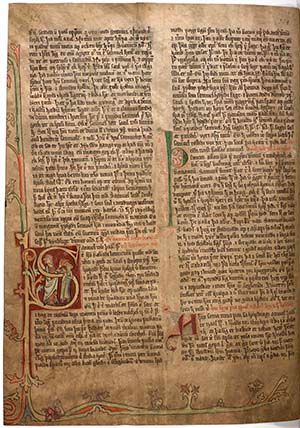 In the Medieval period the Bible was in Latin. Nevertheless, parts of various length were translated into Old Norse, Swedish and Danish.

In the project "Retracing the Reformation. The dissemination of the Bible in Medieval Scandinavian Culture" we investigated the parts of the Bible that were translated. We were interested in which parts were translated, what form the translations took, and whether or not traces of these translations are represented in the Post-Reformation Bibles that were published in Sweden, Denmark and Iceland in the 16th century.

Further, we explored why the Bible as a whole was not translated in the Medieval Period, and to what extent the parts that were translated were altered: Was it still regarded as Bible text?

Through this project we gained further knowledge on how the Bible stories and the gospel were conveyed to Medieval Scandinavians, in spite of the fact that the Bible itself was in Latin.

Further, we gained knowledge on how the vernacular languages gradually gained more authority and thereby became suitable for new kinds of texts.

The project was a cooperation between scholars at:

The project was funded by NORDCORP.