In my talk, I will reflect the perspective and results of the research project and network 'kakanien revisited' as a contribution of an exemplary field of area studies in cultural research.

In a first step, I will describe all the tools the group has adapted from postcolonial studies: the subversion of the relation between centre and periphery, heterogeneity and identity, the relation between culture and power, the narrative of culture and civilisation, gender aspects, the construction of the 'own' other. In a second part, I will discuss the differences between post-colonialism and post-imperialism, also with regard to the process of nation building. Finally, I will refer to the imperial traces in Austrian literature of the 20th century, e.g. in Roth, Canetti, Musil, Broch, Zweig and others.

Reference: Wolfgang Müller-Funk: The Architecture of Modern Culture. Towards a narrative theory of culture. Boston-Berlin 2012. 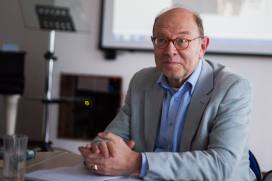 Wolfgang Müller-Funk is since 2009 Professor for Cultural Studies at the Dept. of European and Comparative Linguistics and Literature at the University of Vienna and Research Coordinator at the School (Faculty) for Philology and Cultural Studies.

Research interests: Cultural Theory, Narrative Theory, Romanticism, Avant-Garde and Modernism, the Essay. Since 1998, he has led numerous research projects in the field of Central European Studies and Cultural Studies.