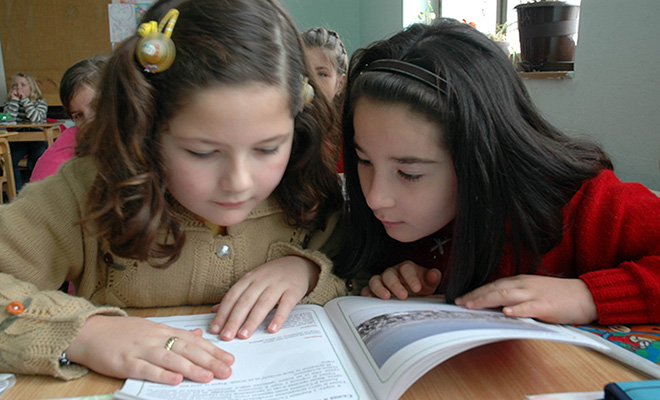 In certain multilingual regions in socialist Yugoslavia, it was common for children to learn a minority language. Nowadays, children have to learn their neighbour’s language in other ways.

In South Eastern Europe, some of the biggest empires and political blocks have bordered each other. The Western and Eastern Roman Empire, the Habsburg Monarchy and the Ottoman Empire, and in recent history, the Eastern and Western Block during the Cold war.

The result: A centuries-long encounter between Christian, Jewish, and Islamic traditions.

“Today, the legacies of these historical periods can be traced not only in demographic composition, but also in institutions, as well as in many linguistic and cultural layers and multilingual practices”, says Stijn Vervaet, Associate Professor in Balkan Studies and head of a research project on how the legacy of the Habsburg monarchy lives on in Eastern Europe today.

A long legacy of multilingualism

In the Habsburg Monarchy: Slovenian, Hungarian, German, Czech, Polish, Ruthenian, Romanian, Serbian and Croatian and some words in Italian. And in the Ottoman Empire: Albanian, Bosnian, Sephardic, Serbian, Bulgarian, Greek, and Turkish. Not to speak of the many non-institutionalized Romani languages in both empires.

These languages created multilingual imperial worlds in Southeastern Europe, and for many educated people, tradesmen, craftsmen and in some regions even peasants, it was common to speak several languages. As it has been for centuries.

“In the time of the Habsburg monarchy, many people in multilingual regions could speak two or more languages ​​of the empire. The mechanisms of social mobility required that if you wanted to climb the social ladder, you had to be fluent in German or Hungarian, not just in your own mother tongue,” says Vervaet.

Going back in history, to the socialist Yugoslavia (1945-1990), but also to the centuries predating the First World War, when Austria, Hungary and some of the Balkan states were assembled in the vast Habsburg Monarchy, Eastern Europe has a long legacy of multilingualism and multiculturalism.

From the end of the 13th century until after the First World War, the House of Habsburg ruled large parts of Europe, at times known as the Empire of Austria and since 1867 as Austria-Hungary.

When the empire dissolved after World War I, contemporary nationalist intellectuals understood it as a transition into the more modern European nation-state.

“But nationalism actually came into being because the Imperial structures and institutions allowed for, and even supported it,” Stijn Vervaet explains.

One of those mechanisms was the census. When the empire’s censuses started asking people about their spoken languages, it allowed for citizens to be categorized in new ways.

“It was a perfect tool for nationalist movements. Now they could refer to statistics and say 'Look - even though German is the administrative language of the empire, there are many millions of Czechs here'. This way, they could also claim collective rights.”

The idea of ​​one territory - one identity - one language is at the heart of modern European national and language ideology. However, the fact that nationalism flourished towards the end of the monarchy did not mean that all citizens supported this idea.

“Even if one indicated Slovenian as the first language in a census, one did not necessarily identify as a Slovenian national. Many felt like citizens of the empire,” says Vervaet.

Nostalgia for a multicultural past

From the time of the Habsburg monarchy up until today, many linguistic minorities have lived side by side in Vojvodina, today Serbia's northern province. Today, most Serbs want to learn English or German.

Marija Mandić from the Department of Balkan Studies at the Serbian Academy of Sciences and Arts is a sociolinguist and co-investigator of the project. When doing fieldwork in northern Serbia, she often encounters a strong nostalgia for periods when competences in the languages of the regions were more valued.

“People talk warmly about what life was like during the Habsburg Monarchy and the socialist period. Of course, ethnicity and national identity played a role in people's lives, but not as crucial as described in nationalist discourses,” she says.

“When we go to archives, or talk to people, we see that they neither stick to their national group only, nor see other nationalities as rivals. They have developed strategies for accommodating to life in multilingual and multicultural environments.”

A recurring theme in Vervaet and Mandić's research is national indifference, a headache for hardcore nationalists. According to the researchers, what stands out to them is that people are genuinely pragmatic.

“For instance, historical studies of the German-Czech borderlands show that most people actually didn’t care. If their child could have a better education and a hot meal at the Czech school, they would send them there. If the German school suddenly offered two hot meals and free textbooks – they would choose the German school,” says Vervaet.

This pragmatic attitude also applies when ethnic minorities demand their rights today. They just as easily resort to the past as to contemporary EU institutions.

Mandić highlights the Bunyev minority, living in both Serbia and Hungary. They speak a variety of Serbo-Croatian, but in Austria-Hungary, they were recognized as a separate language group. Since the dissolution of Yugoslavia, they have not been allowed to use their own name for their language.

“When striving to be recognized as a separate language group, they call upon the status they had during the Habsburg and Austro-Hungarian era, but also the EU, which has a charter for minority languages,” she says.

“In my experience, people of multilingual regions like Vojvodina in Serbia and Transylvania in Romania are very historically conscious and use the connection to the past when they need it to underpin current political claims.”

It is common for children who speak a minority language to learn the main language at school, perhaps in combination with their mother tongue. What if it were just as common that those who speak the majority language also learn the language of another ethnic group? This was practiced in certain multilingual regions in socialist Yugoslavia.

“It was an attempt to overcome hierarchies between language groups, and to create more equal relations,” says Mandić.

She has studied this practice in the Vojvodina region in northern Serbia, where Serbian children in the seventies and eighties learned Hungarian in school.

“It meant a lot to people there that not only Hungarians could speak Serbian, but that Serbs were in a way forced to learn Hungarian. Many look back on this time and say they felt more respected and on an equal footing,” she says, adding:

“It is an interesting and completely unique example of how the state supports community multilingualism.”

Language learning from the grassroots

Even though socialist Yugoslavia's language policy ensured that the school played its part in recognizing minorities, the most important language learning takes place in everyday life.

“People have always learned by playing with other children in the street or by taking on a job with a family who speaks another language,” says Mandić.

Or as linguistic anthropologists have documented was common practice in many multilingual regions in the Habsburg Monarchy: Children were exchanged.

“During the summer holidays, many peasants sent their children to families from other ethnic groups for two to three months. This was a way to learn languages, but also food culture and farm work,” say Vervaet and Mandić.

It served as a free language school.

“This was a grassroots initiative, and not something the monarchy dictated. They did it because, like all parents, they wanted the best for their children. If you live in a multilingual environment and want the children to do well, it is crucial that they know the languages ​​that are in use,” says Vervaet.

According to a German woman Mandić met during her field research in the town of Kikinda in Vojvodina, people engaged in child exchange until the 1950s.

Today, the EU promotes linguistic pluralism. When people can move freely across borders, we all need some literacy in other European languages. This was also the case in the Habsburg era.

“Tradesmen and farmers did not learn languages ​​because they had a romantic idea of ​​the value of knowing a foreign language. If you wanted to succeed in trade in Vojvodina, or to find work in the big cities at the end of the 19th century and the beginning of the 20th century, you had to have a certain repertoire in German, Hungarian, Serbian, Romanian, and some words in Romani,” says Vervaet.

He describes a handbook in Hungarian from the 19th century, which explains sentences such as 'how much does a pig cost at the market today' and 'where can I find the train station'.

“It was not their goal to become a polyglot and be fluent, but to have a repertoire that you can use for your daily purposes and your economic needs,” he says.

The researchers have no definitive answer to whether supporting local customs for mutual language learning can play a role in peace and reconciliation but point out that past practices as well as the socialist language policy can inspire us even today.

“Just imagine the seventies in northern Norway, in regions where Norwegians and Sami lived together, if the Norwegian were encouraged to learn Sami. Even though they would not be fluent, it would probably have meant a lot to the Sami minority to have a neighbor who could say a few friendly phrases in their language,” says Vervaet.

Probing the Boundaries of the (Trans)National is a research project at the Department of Literature, Area Studies and European Languages. The project explores the continuities and discontinuities of the legacy of the Habsburg Monarchy in memories, transnational literary networks and multilingual practices in East Central Europe. Stijn Vervaet, Associate Professor of Central Europe and Balkan Studies, is the project leader and Marija Mandić is the co-leader.