This project will explore Ukraine’s domestic political development after the Euromaidan incident in 2013/2014. 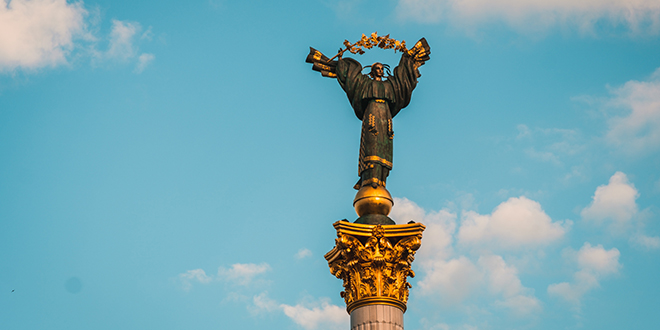 The Independence Monument located on Maidan Square in Kiev.

National values and political reforms in post-Maidan Ukraine (VALREF) addresses the fundamental changes in the framework for state- and nation-building in Eastern Europe after 2013/2014.

Euromaidan was a wave of demonstrations sparked by an internal dispute over the country's approach to the EU. The rallying point for the demonstration was Maidan Square in Kiev. In the course of January–February 2014, protests disseminated throughout the country, and ended in a violent confrontation between demonstrators and security forces in Kiev.

With the Russian annexation of Crimea and the rise of a festering, Russia-sponsored, conflict in Eastern Ukraine, the central pillars of European security were challenged, as were the expectations of a wider liberal European order based on:

On the one hand, these events were preceded by rising tensions within Ukraine on issues of elite corruption, volatile governance, and stalled state reforms. On the other, they created a new impetus and framework for state- and nation building in Ukraine.

VALREF will address the crucial intersection between popular expectations and state resilience in post-Maidan Ukraine.

The overarching focus of the project will be the implementation of political reforms, and whether reform policies gain resonance in shifting public opinion. This again entails the following research questions:

To answer these research questions, we will combine tracing the new cycle of reform policies with grounded empirical research into changes in public perceptions.

We will use a model derived from North et al (2009) modified to incorporate models for nation-building, and checking this model against empirical, project-generated survey evidence.

By compiling and conducting a two-wave national survey to be held in Ukraine in 2022 and 2024, and conducting local focus group interviews, the VALREF empirical output will address:

The Research Council of Norway.