ACTA volume XXXII is on its way! 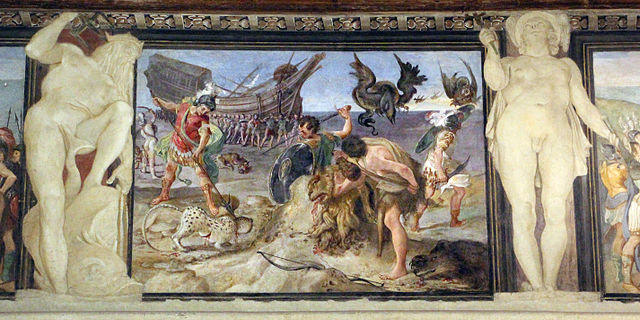 The next volume of ACTA contains a wide range og articles related to art history and archaeology, with Mattia Biffis, Sam Hardy and Christopher Prescott as editors. Here are two teasers that hopefully will make you want to read more:

Luca Esposito discusses the 'the reality effect’ and Carracci’s frequent use of the figure seen from behind in their graphic and pictorial oeuvre (i.e. in the frescoes in Palazzo Fava, in the Cloister of San Michele in Bosco by Ludovico Carracci, in the series of the Diverse Figure by Annibale Carracci, and the engraving of Ogni cosa vince l’oro by Agostino Carracci). It claims that the figure seen from behind plays a rhetorical function instrumental to the Carracci’s search for a new form of naturalism in painting. In particular it creates a ‘reality effect’ that enhances the naturalistic rendering of the pictorial composition.

Josephine Munch Rasmussen article is about the provenance of “The Dead Sea Scrolls of Buddhism” in the Schøyen Collection. Academic research on newly discovered ancient Buddhist manuscripts is largely based on objects that come from the antiquities market and to a much lesser degree on objects coming from documented and controlled archaeological excavations. Despite their being unprovenanced, collectors and scholars often present such objects with narratives mimicking provenance. The use of the label “Dead Sea Scrolls” attached to archaeological material without connections to Judaism or early Christianity is a prevalent example of this scholarly praxis. In this article, we deconstruct provenance narratives associated with the undocumented Buddhist manuscripts in the Schøyen Collection and discuss their implications for research on these manuscripts and beyond.

Both articles will be made available soon at FRITT.

ACTA is an international open access journal. It publishes articles about the Mediterranean region's archaeology, art history and within the broader interdisciplinary mission of the Norwegian Institute in Rome.