In the Viking era, a number of slaves were beheaded and then buried together with their masters. New methods of skeleton analysis reveal more about the life of the poor more than a thousand years ago. 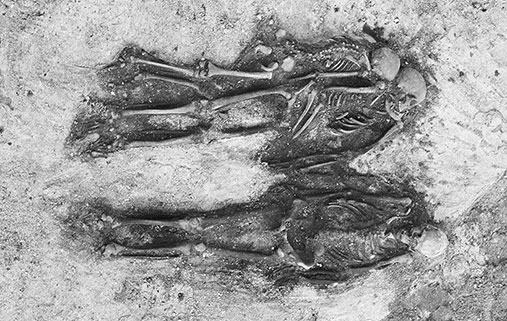 In 1975, three intact skeletons from the Iron Age were found on the Tommeide farm in Tomma. Naumann interprets this as a family grave. - Despite possible kinship between them, probably as members of the same household, the child nevertheless had a diet that was different from that of the two adults during the last years of their lives. (Photo: Anne Stalsberg, NTNU Vitenskapsmuseet)

How was life for common people in Norway during the period 400–1050 AD? Can we learn more? Yes, according to Elise Naumann, research scholar in archaeology. By using isotope analysis to examine ancient skeletons, she has made several remarkable discoveries. The research results from the analysis of skeletons found at Flakstad in Lofoten have also been reported in the American newspaper USA Today.

- You have also published an article about your findings in the internationally renowned science periodical Journal of Archaeological Science?

- Yes. The material includes skeletons from a total of ten individuals, found at Flakstad. At least three of these, which were found in double and triple graves, are headless. The isotope analyses, combined with analyses of ancient DNA, provide grounds to hypothesize that the headless skeletons were slaves who were decapitated before being buried along with their masters. This says a lot about the great differences between people in the society of the day. Life was undoubtedly difficult and brutal for the majority of people. Only a very few were privileged.

However, there is nothing new about the fact that slaves in the Viking era were buried along with their masters, and in some cases also beheaded before burial, Elise Naumann points out.

- On the contrary, we build on earlier grave finds of this type which suggest that slaves were sometimes bound hand and foot.

What is new about this, she explains, is how the scientific analytical methods used and the results they produce give fresh insights into the society and people of the past. Isotope analyses in combination with osteological analysis gives us information about people's diet and health. Analyses of ancient DNA (aDNA) yield knowledge about genealogy and genetics.

In her dissertation work, Elise Naumann has investigated the skeletons from a total of 56 individuals buried in single, double or triple graves. Most of them were found in the three northernmost counties of Norway and date from the period 400-1050 AD. A large part of the skeletal material was borrowed from the Schreiner Collection at the University of Oslo.

- Hardly any isotope analyses of skeletal material from this period have been performed before, Naumann says. She says that the analytical method, combined with examinations of ancient DNA, have provided information not only about diet, but also about social relations. This is the case for the skeletons from Flakstad.

- The genetic analyses of the Flakstad Vikings show that the people buried there were most likely not related through the maternal line. The isotope analyses show major differences in diet. The headless skeletons, like certain other poor individuals included in the study, had a diet consisting largely of fish. The other people in the graves had eaten much more land-based foods, including meat.

The results of Naumann's research suggest that people of rank ate more meat and other animal products than the poor did. The results are also interpreted based on the knowledge that the meat of animals held a special significance in religious contexts during the Iron Age in Scandinavia.

One of Naumann's goals has been to shed light on the lives of common people during the Viking era. 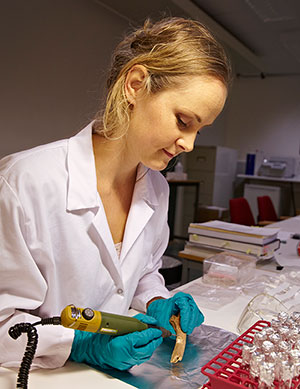 - Attention has primarily been paid to the graves of the wealthy, which contained a lot of grave goods for archaeologists to examine. Analyses of skeletal material can also give us insight into the lives of those who didn't leave much behind in the world, she says.

A grave is also the result of the choices made by those who were left behind, Naumann points out. The analyses of skeletons, on the other hand, provide information about the live that was lived.

- There are no hidden agendas in the results of isotope analysis.

- What is the most surprising thing you have found?

- The large variations in diet, even in a small place like Flakstad in Lofoten. In order to find food in that era, extensive, collective cooperation was necessary. And even then, people had very different diets.

Further investigation into the life cycle of the past

The research suggests that distribution of food and meals was a significant structuring factor for Iron Age society in Norway, Naumann concludes.

- I am in the process of writing a new scientific article based on my doctoral work. Double graves is also my point of departure for this article, but in these ones, the people buried together might in some cases have been related to one another.

- How do you explain those differences?

- And although we know little about the scope of the practice, it may have been common to put children in foster care with people of lower social status, for example slaves or servants. It is likely that the children's diet would have been affected by this. This may partly explain why the isotope analyses show that many people had different diets as adults than they did when they were children.

- It is possible to use isotope analyses to learn about an individual's life cycle – about their journey through life. This is something I want to study further. I see a great potential in more advanced use of isotope analysis.

Analyses of the isotopes 13C (carbon) and 15N (nitrogen) of the protein collagen in human remains can tell us something about the main protein sources for the individual in question. It is possible to distinguish between a marine-based diet and a diet consisting of food products from land-based animals and plants.

In addition, the values of strontium isotopes are analysed because the composition varies between geologically different places. For example, isotope analyses of strontium in tooth enamel will reflect the strontium values that are characteristic for the region in which the person lived during the time the tooth developed, that is, childhood and adolescence. Consequently, the analyses can reveal something about geographical migration – people who are buried in a different place from where they grew up.