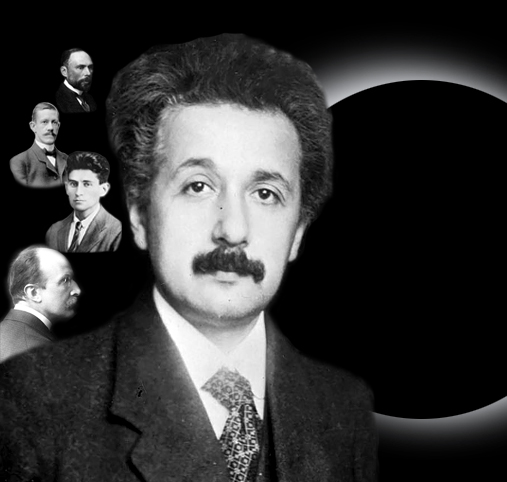 Albert Einstein is one of the characters in a new play by Robert Marc Friedman. Other characters in "Transcendence", from top to bottom: Wilhelm Ossen, Allvar Gullstrand, Franz Kafka and Max Planck. (Illustration by: Annica Thomsson)

“Scholarly publications are exciting to write, but touching the hearts and minds of people, and getting them to think differently about science ... you get a completely different response,” says Robert Marc Friedman, Professor of the History of Science at the University of Oslo.

With an educational background in history, science, drama and performance, Professor Friedman has had a number of theatrical successes. In his play “Remembering Miss Meitner”, audiences were introduced to the female physicist Lise Meitner, who fled to Stockholm from Berlin in 1938 but who was not accepted by the Swedish scientific community. Now Friedman is hard at work preparing for the staging of a new play, “Transcendence”, in which three stories are woven around Albert Einstein’s general theory of relativity.

“Transcendence” is being funded by Hauptstadtkulturfonds Berlin, which will have its premiere at The EnglishTheater/International Performing Arts Center- in Berlin in November, one hundred years after Einstein’s theory was launched. Staged readings of the play-in-progress are scheduled for New York and Baltimore in April.

Wanted to transcend their own time

The play takes us among other places to Prague in 1911, where the physicist Albert Einstein and the author Franz Kafka, both of Jewish origin, live in a time of anti-Semitism and exclusion. Both dream of transcendence: to  escape this world and to find comfort through creative work.

“In their theories and narratives, both men are trying to depict an objective reality, but they are forced to live in a time and in a space with difficult social and political challenges. Again and again, they find that life does not permit escape through one’s creative work,” explains Friedman.

The play also explores the relationship between Einstein and his Berlin colleague Max Planck. Both regard theoretical physics as a means of attaining transcendence, but their friendship is put to the test because they react differently to political, social and personal challenges.

While many stage directors tend to make up stories when dramatizing real-life events, Friedman is concerned that he, as an academic scholar, should be able to justify everything. Noone knows all the historical facts, but it must bepossible for everything in the play to have happened.

“The dramatization creates its own theatrical reality, but everything is based on historicalscholarship. Through research it’s possible to get to know extremely well someone who has once lived. I can justify why I allow the characters to act and think as they do in the play. For me it’s a creative challenge to come up with lines which are funny and lively while both artistically expressive and historically accurate, ” he says.

For example, the play features a story about an encounter between Einstein and Kafka. Friedman is not certain that this happened, but he knows that they were moving in the same circles at the same time so it is not unthinkable that they met.

He believes that there is sufficient basis for excitement and dramatic tension in the historical material.

“When we start examining letters, diaries and the historical context, sometimes reality exceeds imagination. Many people think of Einstein as an asocial genius, but he was actually highly politically engaged. He was viewed as a radical;  many of the complex and less flattering aspects of his personality frequently are ignored in he heroic portrayals  of him as a scientist.”

Never received the Nobel Prize for his theory of relativity

Audiences will also encounter the figures of Allvar Gullstrand and Carl Wilhelm Oseen, who during the period around the First World War were members of the Swedish Nobel Commitee for Physics. Gullstrand was himself the recipient of a Nobel Prize in Medicine, but insisted on sitting on the Nobel Committee for Physics. He took it upon himself to evaluate Einstein’s theories of relativity. He was strongly opposed to Einstein being awarded the Nobel Prize and set about to prove the theories wrong.

In 1981, Friedman published an article in the scientific journal Nature about why Einstein never received the Nobel Prize for his theory of relativity. Now, after a great deal more research on the subject, the time has come to bring this great question to the stage: Why did Gullstrand insist on sitting on the Nobel Committee? And why was he, and so many others, so greatly opposed to the theory? Many in 1920 viewed the theory of relativity as “Jewish charlatanism”, an attempt to poison echt German science and culture.

“Gullstrand is an interesting figure dramatically. But instead of portraying him simply as an arrogant individual, the play questions why he did what he did, and what was at stake during this period, both in the Nobel Committee and in European culture and science as a whole,” explains Friedman.

It was only when Gullstrand’s friend Carl Wilhelm Oseen took a seat on the Committee in 1922 that Einstein was awarded the Nobel Prize – but not for the theory of relativity.

The aim is to spark debate and entertain

Robert Marc Friedman was commissioned to write the play by the Max Planck Institute for the History of Science, based in Berlin. In November and December this year Einstein’s one-hundred-year-old theory will be celebrated with an international conference in Berlin,where the play will be performed as well as a part of the City of Berlin’s official programme of festivities.

The Max Planck Institute has also supported the research and writing of the play, in partnership with the Department of Archaeology, Conservation and History at the University of Oslo.

“I hope the play will spark debate but also be entertaining. I want to show that it’s possible for exciting drama to convey a credible piece of history,” says Friedman.

Friedman has experienced an engaged response from audiences to his earlier science dramatizations in a similar vein. The performances of “Remembering Miss Meitner” almost always resulted in enthusiastic  discussion from the public whether it was Gothenburg, Bologna or New York.

“A play should deal with subjects that everyone can identify with. Science and history can be exciting, but when dramatized in the form of more general  themes to which most everyone can relate, it is possible to  reach a much wider audience,” affirms Robert Marc Friedman.