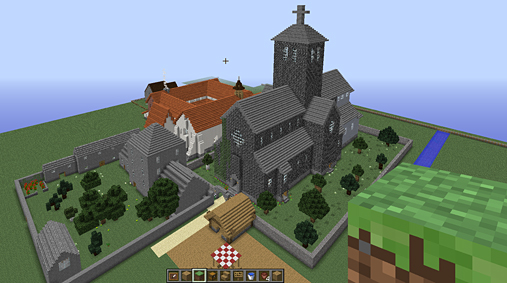 The medieval city is constructed on a scale of 1:1, with one brick corresponding to one metre.

History students who take "Oslo in the Middle Ages" as a special subject can learn about bygone times in new ways. John McNicol, lecturer at the university, has given the students the assignment to rebuild the medieval city.

"Minecraft has been the world’s most popular video game for the past five years, and it is quite simple to learn. Once I found out that there is a separate version for use in education, I rented server space from Minecraft Education and purchased 60 licences for the students," McNicol explains.

The result is that the ruins of Oslo’s medieval city have been resurrected as a digital, lego-like city. The church of St. Mary, The Royal Manor, The St. Nicolaus church, The St. Clemens church, St Hallvard’s Cathedral, The old Bishop’s Palace, the St Olav monastery and The church of the Cross lie side by side, made up of tens of thousands of virtual bricks.

The students taking this as a special subject learn about Oslo’s history from around the year 1000 until the city was re-located in 1624. The students’ assignment involved reconstructing the city as it was in its heyday in around 1300.

"600 years is a long time, and the city changed significantly over that period. Mariakirken church, for example, was first built as a wooden post church in the 11th century, replaced by a new Romanesque stone church in around 1100 and yet another new version in brick in the 14th century," McNicol tells us.

The students visited the medieval city to take precise measurements of the ruins and to study materials. They then had to refer to the sources to enable them to imagine what the buildings that would have stood on today’s ruins looked like originally.

Torches on the walls and light from the windows

John McNicol has the screen in front of him and begins a guided tour around one of two versions of the Mariakirken church. This version was created by four students, two of whom sat up all night to complete it. Torches burn on the walls, a crucifix hangs above the altar and a dim light enters through the windows. The church is constructed of red brick; in fact, the king built a large brick factory on the opposite side of the Alna river to obtain materials for his new church.

Although the students have discovered a great deal of information for themselves, not all of it can be considered reliable. In some places they have allowed themselves some personal interpretation, while in others they have chosen the most likely solutions – for example because they are found in similar existing buildings.

"The students were asked to find buildings from the Middle Ages that might have resembled those in Oslo. For example, it is probable that the Norwegian king envisaged the Mariakirken church as a site of royal burial. Roskilde Cathedral in Denmark functioned as such, and this is a brick church constructed in the same period. It is therefore not unlikely that they had many features in common," says McNicol.

The university lecturer has faith in using Minecraft in his teaching. As far as he is aware, he is the first academic at a Norwegian university to do so. Yet the idea of reconstructing places in Minecraft is not new; in 2014, Denmark laid out the entire topography of the country on a scale of 1:1 in Minecraft, and in 2015 the Norwegian Mapping Authority accomplished the same thing with Norway. The students have also built the medieval city on a scale of 1:1, which has forced them to make accurate measurements of the ruins.

"The world’s teachers are no longer on the threshold of using digital tools. We have crossed the threshold and are now standing in a chaotic space with undreamt of possibilities. By using Minecraft, I think that the students obtain a more direct sense of Oslo’s time and space in the 14th century. Instead of reading that there were many churches in Oslo, they experience it physically. I think that at the very least they will remember their own buildings much better than if they had just read about them," says McNicol.

At one point a group of students discovered that there was no room for their building because the St Olav monastery stood in the way. Someone had miscalculated, and the students begged John McNicol for help.

"I told one of the students that he had to assume the role of the king’s chief courtier and go to the abbot to discuss the matter. The students had a good laugh, but they followed this advice and found a solution."

Several videos about the completed project are in production and will be uploaded to the YouTube channel Minecraft Education: Oslo in the Middle Ages

From sketch to building

The students measured the ruins precisely and made sketches that were transferred to graph paper to facilitate the construction in Minecraft.