UiO Faculty of Humanities Department of Archaeology, Conservation and History
Main navigation
Back to uio.no
Sub navigation Menu
Research > Research news and events > Research news > 2021 > Adam blaming Eve in the Garden of Eden laid the foundations for our modern-day legal system
Norwegian version of this page

The right to defend oneself in front of a judge is but one of many legal principles that originate from Medieval canon law. 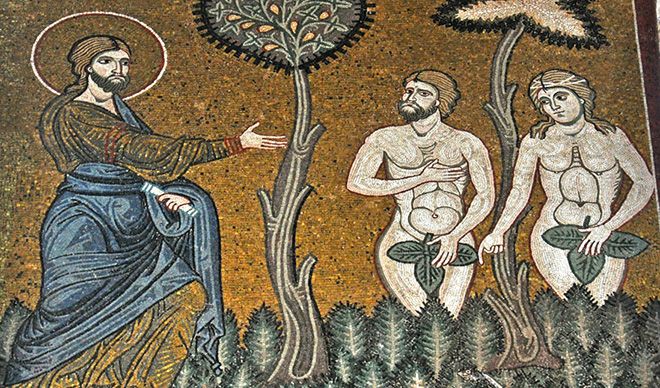 God calls to Adam: ‘Adam, where are you? Who told you that you were naked?’. Adam defends himself by blaming Eve. The scene is illustrated on this mosaic from the Monreale Cathedral on Sicily.

For thousand years, brides and bridegrooms have been declared husband and wife by saying “I do” in the presence of witnesses. The marriage ceremony could have been something else entirely were it not for the man who decided that a verse from the Bible should represent the legal basis for marriage.

“In the Middle Ages, the decision was made that the Church should govern marriage, and that consent between the two was the foundation of the matrimony,” says Anders Winroth, Professor of Medieval History at the University of Oslo.

More specifically, this took place in the 12th century, when the Italian lecturer Gratian started collecting the many contradictory laws of the Middle Ages in a large, thick book, known as Decretum Gratiani or Concordia discordantium canonum.

“When Gratian initiated academic studies of law, it changed everything,” says Professor Winroth, who has studied Gratian’s life and works for many years.

Established that consent was paramount

In the Early Middle Ages, it was commonplace for parents to decide whom their children would marry. According to Professor Winroth, it was therefore surprising that Gratian chose to emphasise consent between man and woman.

“This was of major significance, also in Norway, where Archbishop Jon included marriage provisions in his Christian law book from 1273. These provisions clearly state that both the man and woman must say ‘I do’. This remains key to this day – irrespective of where the marriage ceremony takes place, in a church or in front of a mayor. It is at the moment that both say ‘I do’ that the couple is officially married,” he says.

Gratian, often referred to as the father of canon law, remains important to this day for several reasons. During the Middle Ages, canon law was often just as important as secular law, as the Church at that time performed many of the functions of modern-day Government. The gradual harmonisation of European laws throughout the Middle Ages can be attributed to Gratian’s innovative work.

“He was the first to provide teaching on canon law in an academic context,” continues Professor Winroth.

The twelfth century is seen as a period of transition in European history: Major advances were made in iron production, agriculture became more efficient, the population grew and trade formed links between European countries. Literacy and text production increased. Previously, local assemblies had dealt with issues involving who would marry whom, who would pay tax to whom for what, et cetera.

“These local assemblies abided by age-old traditions. If one person accused another person of stealing a horse, the assembly would think back to the previous punishment for such an offence, and they would make the same decision again.”

This now came to an end.

“Professors and students started to deliberate what it actually meant when a person broke a law.”

Moot courts with prosecution and defence

The source material from medieval education contains innumerable examples involving horses, which were naturally important in the twelfth century. What would happen, for example, if a person bought a horse that turned out to be lame? Would he receive a refund for the purchase? What if the buyer takes the horse to war? As the horse is lame, the buyer is taken prisoner and has to pay a ransom for his freedom. Could he then demand compensation for both the price of the horse and the ransom?

Gratian had access to numerous acts and laws from both the Church and Roman law, and analysed these together with his students.

“Gratian would separate his students into two groups in the classroom. Each group was to act as advocates for their side of a legal conflict, and to argue their side by making reference to the legal texts of which they had knowledge.”

“This type of role play, also known as moot courts, is a common feature of teaching law today.”

Determined the principles of law

In the earliest years of the universities, being a professor was not lucrative. The universities were not yet well-established institutions or buildings at that time, so the lecturers would provide classes in their own houses at home for those who wanted to study.

“Men like Gratian tended to aim for more gainful employment, most frequently in the Church. As soon as Gratian was employed as Bishop of Chiusi, Tuscany, he stopped teaching,” explains Professor Winroth.

His book lived on, however. Gratian’s successors continued to apply the same method at work, collecting legal texts and comments in the book.

Professor Winroth believes that Gratian’s most significant legacy is not necessarily the specific legislation he established, but legal procedure.

“He initiated a process of systemisation of how a court of law functions, what is defined as evidence and how a court procedure should be carried out.”

Rights dating back to Adam and Eve

During the Middle Ages, the divide in jurisdiction between the state and the Church was a frequent subject of negotiations. The legal source material systematised by Gratian originated both from canon law and Roman law. When deciding which carried most weight, he would designate something as “natural law”, as based on universal legal principles.

“Gratian interprets this to be what God says in the Bible,” explains Winroth.

The professor of medieval history claims that for Gratian, the story of Adam and Eve represents some of the most fundamental elements of the legal system.

“When Adam takes a bite of the forbidden fruit, God calls to him: ‘Adam, where are you?’. Gratian interprets this as Adam being summoned to court. God accuses Adam of his crime, and he has the opportunity to defend himself. As we know, his defence was to blame Eve, but this is a valid defence.”

Gratian and his students concluded that as Adam was allowed to defend himself, this should be deemed natural law.

“This represents the core of our modern-day legal process: No one shall be subject to a secret legal procedure, but shall be summoned to court and allowed to defend oneself.”

From Bologna to Norway

With the emergence of new universities in Europe, Gratian’s book was gradually introduced into teaching. Bologna was an academic hub at the time, and public servants and students from all corners of Europe travelled there to study.

“Bjarne Lodinsson was one such student who travelled from Norway to study Roman law in the 13th century. He brought what he had learnt from southern Europe back to Norway, where he was appointed chancellor to the King, a role similar to that of Prime Minister,” says Winroth.

At that time, Magnus Lagabøte was working on the national law that was promulgated in 1274. In this law, the divide in jurisdiction between State and Church is clearly influenced by law from southern Europe.

As the Middle Ages progressed, both canon law and Roman law, in addition to feudal law, became subjects of academic study, and both the form and content of law were incorporated into legislation throughout Europe.

“As the rays of the sun, the academic law radiated all the way from Bologna to local courts and law in Scandinavia.”