There are clear parallels between the erosion of democracy currently being witnessed today and the disastrous takeover of power by the Fascists and the Nazis in the 1930s, observes historian at the University of Oslo. 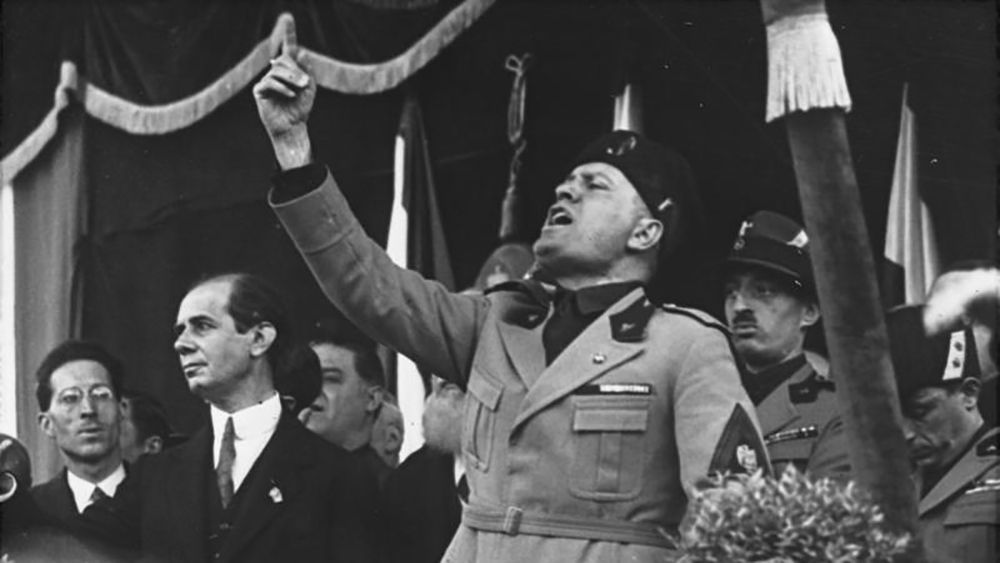 Populism was one of the hallmarks of Italian fascism. Here we see Benito Mussolini address the crowds in Milan in 1930.

Economic uncertainty, migration, ethnic nationalism and the narrative of a strong leader. These are all key words that might describe several European countries today, but which also define the interwar years – a period during which democratic countries took an authoritarian turn which eventually ended in war.

“Obviously all periods and events are different. But much is based on fixed patterns connected to the nature of mankind. This has not changed much over the centuries.”

These are the words of Elisabetta Cassina Wolff, a historian at the University of Oslo, who elaborates:

“We are guided by the same emotions such as ambition, fear, vengeance or our need for safety. That’s why history is so vital to understanding the present – because it's about people.”

For many years Wolff has conducted thorough research into fascism and the far right, and she believes that the interwar period in particular has a lot to teach us about the situation today.

After World War I ended in 1918, many European countries struggled both politically and economically. However, according to Wolff the 1920s were looking promising.

“Most countries experienced their worst crises during and immediately after the war, and during the 1920s they were busily involved in establishing stable and liberal democracies. For example, voting rights were extended in most countries.”

Then came October 1929, and the Wall Street Stock Exchange crashed. The economic ripple effects had a major impact on Europe which during the 1930s became characterised by ethnic nationalism and revanchism.

“This was prevalent in those countries that had lost the war, primarily Germany, but also Italy, which believed that it had not done well out of the peace settlement.”

The Treaty of Versailles, the peace treaty between Germany and the allied ‘winning countries’, redistributed colonies and German resources. It also drew new borders in eastern Europe which resulted in ethnic groups being spread across several countries.

The 1920s thus became a period of migration, and minorities in several Eastern European countries struggled to integrate.

Wolff points out that there was a lot of fear in public society. Xenophobia resulting from migration, and fears of communism after the Russian Revolution in 1917.

“Combined with ethnic nationalism and the post-Wall Street economic crisis, this contributed towards the destabilisation of politics, which became increasingly more authoritarian.”

Elisabetta Cassina Wolff emphasises that contrary to popular belief, fascism did not dominate the whole of Europe during the thirties. However, many European countries saw the emergence of large right-wing ultra-conservative, and even right-wing anti-Semitic, movements, especially in Eastern Europe.

Fascist activists and fascist movements could be found in most countries. These all had some common traits:

“But it was only in Italy and Germany that parties inspired by this ideology succeeded in legally coming to power and realising their goals and political programmes,” says Wolff.

Followed the rules of democracy to take power

The decisive factor for the fascists gaining real power was whether or not they faced support or opposition politically.

“Where conservative movements or right-wing elitists were already established as strong political parties, there was no need to support the fascists,” Wolff explains.

In France, Britain and Scandinavia, the democratic parties were strong enough to react against a potential authoritarian turn.

“Whereas in those countries where the established parties were weaker, as was the case in Italy and Germany, they sought help from the fascists. In Italy the fascists entered parliament with a clear minority in the early 1920s. They were welcomed into an alliance with the liberal conservatives who were governing the country at the time, and eventually became the dominant party.”

“The Catholics refused outright to cooperate with the moderate socialists who were not actually revolutionary communists, but socialists keen on reform who could have acted as a political ally to the liberals and the Catholics.”

During the 1920s the Liberal Party relied on political alliances in order to gain a majority in parliament.

“The choice was between moderate socialists and fascists. The choice they made led to Mussolini first being appointed the head of government, and then gaining a majority in parliament supporting all the measures and legislative changes he introduced.”

In both Germany and Italy the fascists had a dual strategy. On the one hand this entailed using violence in the streets against their political opponents. On the other hand, it was about rhetoric and manipulation and having a good dialogue with the elite.

“The Nazis in particular curbed their violent behaviour and anti-Semitism towards the end of the 1920s, so as not to intimidate the elite, the middle classes or the general population.”

Viewed from our present-day perspective, it can be difficult to understand the use of violence. Wolff points to the brutalisation that characterised the entire European community between 1914 and 1918.

“We must remember that an entire generation experienced a war of enormous dimensions. We must also not underestimate the fight against the communist ‘enemy’, which legitimised violence against the ‘red peril’ after the revolution in Russia,” she says.

Dictatorships do not emerge overnight

Wolff believes that this crucial phase during the interwar period in particular, is worth studying closely.

“The fascists did not come to power with a coup d'état, neither in Italy nor Germany. They used the system, which in their two countries was an unstable yet functioning democracy,” she points out.

Dictatorships are not installed overnight either.

“It often takes several years and involves the implementation of continuous measures and legislative changes that kill political and civil rights step by step. It took six years for the system in Italy to legally move from a liberal democracy to a dictatorship. Hitler, admittedly, did it much faster, just two years after his election victory in 1933.”

Although Norwegian politics during the interwar years were associated with a growing Labour movement, this does not mean that fascism did not have supporters in Norway. According to Wolff, there are several explanations as to why the far right failed to gain power in Norway.

“Firstly, Norway did not experience the same frustration that several losing and victorious countries suffered after World War I. Secondly, Norway had no unresolved ethnic, religious or social conflicts, and thirdly, Norway had a strong democratic tradition, just like England and France.”

Wolff also highlights the pragmatic political landscape. The Norwegian Labour Party was a strong, moderate social democratic party which did not frighten the middle classes like the Socialist Party did in Italy. In 1935, the Agrarian Party, now the Centre Party, chose to ally itself with the Labour Party.

“This political agreement was crucial to preventing anyone from harbouring authoritarian ambitions here.”

Wolff also believes that it is important today to take a closer look at how established parties respond to the challenges presented by populist right-wing radical parties. She reminds us that right-wing radicalism as a political ideology has displayed a persistent continuity, extending all the way back to the French Revolution.

“It has had different faces, but the ideological content is the same: opposition to liberal modernity rooted in the freedom and value of the individual, the rule of law, popular sovereignty, power distribution, democracy, pluralism and protecting the rights of minorities.”

Elisabetta Cassina Wolff is Associate Professor of History at the University of Oslo. She has been conducting research for several years on European political history, with particular emphasis on Italian neo-fascism and anti-democratic and right-wing trends. In the autumn of 2022 Cappelen Damm will publish her book entitled “Nationalism and right-wing Radicalism in Europe – 1789-2019”.