Copper in the Early Modern Period. A Comparative Study of Work and Everyday Life in Falun and Røros (completed)

This project explored life and work at Scandinavia’s two largest copper mines, Røros and Falun, in the early modern period from a global perspective. 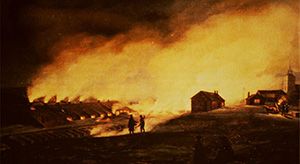 From Røros in 1821 Smelting works operating. From Malmplassen at Røros in 1821. Painter: Jacob Petersen, Bygdø Kongsgård.

This project sought to further our knowledge of copper production in Scandinavia in the early modern period. A central research question was how Falun and Røros tackled the new circumstances which developed from the early 18th century when the world market for copper changed and a new production centre at Swansea in Wales rapidly grew to become Europe's "Copperopolis".

We explored in detail life and work at the mines, local production and showed how the two mines were linked to each other, to European copper networks, and global copper trade.