Munch was his own art disseminator

Edvard Munch produced his lithographs as part of a communication strategy that also included network-building and extensive use of the media. 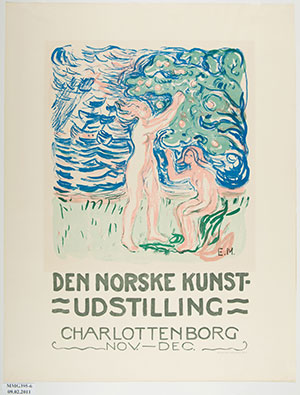 Today, when we talk about a lithographic print by Edvard Munch we generally think of an individual artwork by the famous artist. But Patricia G. Berman, American professor of art history and Munch expert, believes that Munch’s printmaking should also be viewed as part of the artist’s well-developed sense for disseminating and circulating his work.

"Munch has often been categorised as being outside the mainstreams of art, but he was an active participant in the cultural life of his day," explains Patricia Berman, Adjunct Professor at the University of Oslo and affiliated with the  research project Munch and Modernity.

She has the impression that the general public’s view is dominated by the image of the isolated artist who was interested solely in depicting suffering and death. She wants to help change that image.

"If we cleave to the image of Munch as a lone wolf, we miss out on other interesting aspects of his art," says Professor Berman. "Contrary to what many people perhaps believe, he was possessed of a strong will to communicate with the surrounding world – not simply through his works, but also through broader channels that had appeared with the onset of modernity."

Berman describes how the artist was among other things a close friend of journalists and also wrote newspaper articles himself.

"He was quite simply a very modern man for his time," says the professor, who believes that this perspective, far from trivialising the artist, broadens our perspective of the quality of his work.

She explains that Munch only collaborated with two art dealers during his entire lifetime. He generally acted as his own agent and had a strong vision of how his work should be disseminated. In her view, this proactive aspect of the artist suggests that he did possess social skills.

Munch travelled a great deal and was continually learning from various encounters and impressions. Between the 1880s and 1900, Munch lived for example in Berlin and Paris – both cities where the artists of the day received government support as well as private patronage from the new, emerging bourgeoisie. Berman observes that it was in this atmosphere, too, that Munch probably realised the potential offered by the modern age for showcasing his art and bringing it to a wider public. She describes the artist as both strategic and experimental for his time in the way in which he reached out to this new audience. 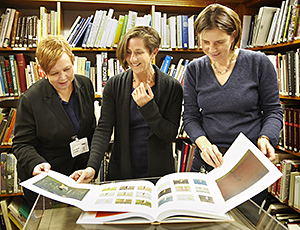 Mai Britt Guleng, Curator at the National Museum of Art, Architecture and Design, Professor Patricia G. Berman of the University of Oslo, and Ute Kuhlemann Falck, Curator at the Munch Museum, looking at the book "Munch on Paper". (Photo: Annica Thomsson)

She adds: "He exploited the media and could also be amusing and entertaining, often through the medium of caricatures with texts commenting on the drawings."

Lithographic prints were at that time becoming a highly visible means of propaganda for conveying both political and commercial messages – a quick, simple and relatively cheap form of expression.

Munch used the technique first and foremost as an artistic medium – driven by high ambitions and artistic integrity. But he also employed that same technique to communicate with a wider audience through his posters and advertisements, among other things to promote his own exhibitions.

Berman explains: "The special thing about Munch was that he did not number his prints like other artists, but apparently produced them non-systematically. Nevertheless, he never permitted them to be produced freely but kept a tight control on the number printed. Nor did he ever venture outside the field of art to commercialise his work, as many of his colleagues subsequently did in order to earn money."

The new methods of reproduction also led to the creation in Germany, in collaboration with the artist, of a catalogue of all his works and the background to them.

"Never before had an artist been presented in such a way at an age of just 44," notes Berman, who believes that this opportunity to see himself and his work in retrospective must have had a considerable effect in reinforcing Munch’s already strong sense of self-awareness.

Munch and Modernity is a collaborative project between the University of Oslo, the Munch Museum and the National Museum of Art, Architecture and Design.