On the Interface between Perception and Cognition. 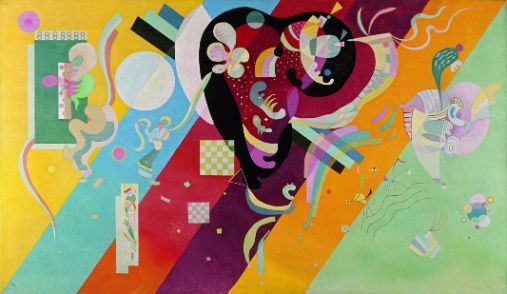 Wassily Kandinsky "Composition IX" (1936). Much of Kandinsky's work can be seen as an artistic illustration of the interplay between the most abstract and cognitive and the most concrete and sensible.

The distinction between sense perception and cognition is basic to our pre-scientific conception of the mind, and has been of momentous importance in the history of philosophy. Recent developments in philosophy and the cognitive sciences, though, call for re-examination of the difference between sense and thought.

In light of these new developments, a thorough investigation that focused directly on the boundary between these two central mental capacities was called for.

In order to understand the boundary between perception and cognition, a novel and systematic approach was needed.

This project considered four aspects of the boundary between perception and cognition and their interrelations.

The project was hosted by the completed Centre for the Study of Mind in Nature (CSMN).

The project involved a number of international and national collaborators.

Barry C. Smith, Centre for the Study of the Senses - Institute for Philosophy (UK)

The Thought and Sense Conference

This conference was dedicated to exploring the nature of the contrast, or contrasts, between perception and cognition. It brought together the main issues of the Thought and Sense project.