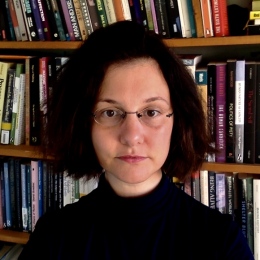 Dr Sara Asu Schroer (Ph.D. University of Aberdeen 2015) is a social anthropologist with research interests in environmental anthropology, more-than-human ethnography, extinction studies and the anthropology of conservation. Currently she is a Marie Skłodowska-Curie Actions Individual Fellow based at the Oslo School for Environmental Humanities, where she conducts the three-year project Living with Vultures in the Sixth Extinction: An Ethnographic Study of Avian Conservation in Changing European Landscapes (LiVE) (2020-2023). Prior to joining UiO she completed a post-doctoral fellowship as part of Arctic Domus (2014-2018) at the University of Aberdeen and she has held teaching positions at the University of Cologne and Stockholm University. She is co-editor of Exploring Atmospheres Ethnographically (Routledge: 2018) and is the founder and previous co-convenor of the EASA network Humans and Other Living Beings (HOLB).

This comparative study of vulture conservation takes place in a time of rapid global vulture decline. In India, a country where the carrion eating birds were once abundant, over 95% of vulture populations have vanished in the past decades due to their vulnerability to residues of anti-inflammatory drugs in livestock carcasses. Similar catastrophic trends are visible across their South-East Asian and African distribution ranges. Europe has become the last stronghold of these large, wide-ranging scavengers that have come to depend heavily on ongoing conservation initiatives, using management techniques such as captive breeding, reintroduction, translocation, monitoring, rehabilitation and strategically placed feeding stations to avoid deaths through direct or indirect poisoning. These conservation initiatives, in turn, depend on close collaboration with local rural communities, especially low-intensive farmers, herders and hunters and veterinarians who are directly affected by vulture management and release.

Based within the discipline of social anthropology, and drawing on an interdisciplinary framework, the project expands science-centred discourses on wildlife conservation and management to include social and cultural analysis. It will do so through an in-depth ethnographic analysis of the situated practices, techniques and ideas involved in vulture conservation today, emplaced in the particular historical, social and political contexts of rural communities in Europe. The research will result in an innovative, integrative study of how to understand and manage wildlife conservation in the Sixth Extinction. Insights gained through the study will thus be of relevance to academic and applied environmental research, while also contributing new knowledge to wider public debates on our possible environmental future(s).

Following her Ph.D. (University of Aberdeen 2015) Schroer completed a post-doctoral research fellowship as part of the ERC funded project Arctic Domus: Humans and Animals across the North, at the University of Aberdeen. In her contribution to Arctic Domus she explored the history and ethnography of captive breeding of birds of prey, investigating how the concept of domestication might be rethought through finding a more nuanced language to talk about the dynamism of human-animal sociality. Her research focused on the affective relationality of inter-species intimacies and the technologies of breeding. This included an attention to the development of captive breeding methods and their journey from aiming to restore threatened bird species in the wild, to the large-scale production of birds of prey for the international bird trade.

Her doctoral research was based on participatory fieldwork, mainly in Britain, and investigated the relationships between humans, birds and their environments in falconry practice - a hunting practice in which humans and birds of prey learn to hunt in cooperation. Exploring the manifold ways of enskilment, learning and communication involved in the practice, the thesis argued for opening of the traditional focus of anthropology to consider meaning making, sociality and knowledge production beyond the human sphere. Her Ph.D. research was awarded the Royal Anthropological Institute’s Sutasoma Award recognising its potential and outstanding merit to the discipline of anthropology.

Schroer S. A. 2018. A view from Anthropology: Falconry, domestication and the ‘animal turn’. In K. Gersmann, O. Grimm and U. Schmoelke (eds.), Premodern falconry and bird symbolism – interdisciplinary and practical considerations: the global perspectives in relation to Northern Europe. Wachholtz Verlag.