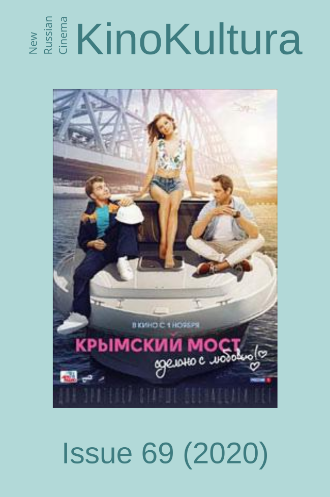 Connecting Crimea to the Russian mainland

Crimea, 1945. The parents of the Crimean Tatar boy Damir are in exile, nobody really knows where. He does not know if he will ever see them again. Damir is lost and stays alone near the Kerch (railway) Bridge, built in 1944 across the Kerch strait that connected the Sea of Azov with the Black Sea and was the predecessor of the Crimean Bridge, which opened in May 2018. But one evening there are two staying under the bridge: Damir and Raya. He tells his girlfriend about his family’s fate, ending with the words: “So, it had to be”.

The opening scene is meant to suggest that this film is not about politics, but about love. The creators of the film, as well as state officials and TV channels which actively promoted the film, kept repeating that this is a long-awaited romantic comedy about summer, love, and everyday life on the bridge construction site. The first three minutes of the film introduce the historical facts about the first bridge to the Crimea peninsula, the Kerch Bridge which collapsed in February 1945. The historical reference serves to show there was no attempt to build a new one, until now. The story is thus set to the construction of the new combined rail- and road-bridge, which connects Crimea to the Russian mainland and was completed in 2018 (road) and 2019 (rail segment).