Pr​epare to get involved: How do contemporary English and German-language novels play on the visuality and materiality of text to engage the reader? 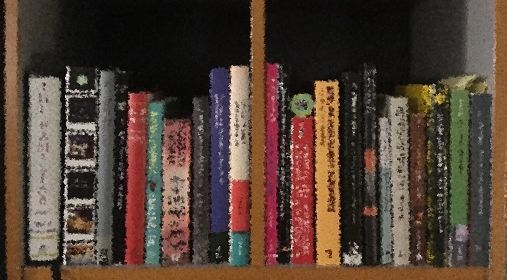 When we read literature, we often have the impression to ‘see’ the storyworld before our ‘inner eye’. This project, «The construction of readers as (co-)observers in multimodal novels. Radical reader engagement in the visual age», looked at contemporary novels that do not only play at readers’ capacity of mental imagery, but turn them into actual observers of visually displayed signs and objects.

The notion of the reader as (co-)observer lies at the heart of this investigation: Based on a cognitive narratological framework it studies the ways in which novels such as Mark Z. Danielewski’s House of Leaves (2000) or J. J. Abrams and Dough Dorst’s S (2013) functionalize images and photographs, visual forms, typography, fictive handwritten notations or even added materials such as inserted postcards or letters for the narration.

The project aimed to answer the question how contemporary German- and English-language novels make use of integrated images, the visuality of written text and the materiality of the book in order to position the reader as a visually perceiving subject who not only ‘sees’ objects of the storyworld but who potentially also ‘watches’ the materializing of the narration itself.

This project received funding from the European Union’s Horizon 2020 research and innovation programme under the Marie Sklodowska-Curie grant agreement No 794549.

Beside the key cooperation with Karin Kukkonen, Professor in Comparative Literature at ILOS, the research project benefitd from a wide network of researchers in Norway and abroad. The main cooperation partners were: Anne Mangen, Professor at the Norwegian Reading Centre at the University of Stavanger; Vera Tobin, Associate Professor of Cognitive Science at Case Western Reserve University, Ohio/USA; Gustav Frank, Adj. Professor in Modern German Literature at Ludwig Maximilians University in Munich.

Literary texts aim at engaging the mind of their readers. However, they also possess a physical reality, a media-material body with which a reader interacts. What role does the material dimension of literature play for reader engagement? How can we conceptualize literature’s materiality in a way that factors in the material and the cognitive turn in literary studies?

We will discuss these and associated questions based on looking into the compatibilities and fruitful tensions between new materialist approaches to literature and second-generation or 4E cognitive approaches that understand the mind to be enactive, embedded, embodied, and extended .

The workshop’s two invited guest lecturers will accordingly shed light on the interplay of material culture, cognition and social practices of literary reading (and writing) from different angles. In a joint working session, we will also further explore notions such as the ‘agency of things’ from a materialist as well as a 4E cognition perspective.

The notion of ‘world literature’ as shaped in the early 19th century can be seen as a key manifestation of the transnational nature and impact of the book. At the beginning of the 20th century, however, the more senior notion of the ‘literary world’ equally gains new attention. The same-titled German periodical Die literarische Welt (1925-1933), a weekly literary and cultural review, aims to shape the public sphere during the years of the Weimar Republic by offering a panoramic and non-dogmatic perspective on contemporary literature and culture (cf. Philpotts 2005).

The goal to interface the local and the global perspective – as well as the contemporary and the historical – constitutes the periodical’s crucial point of departure: The first issue starts with a survey presenting national and international author’s voices on what they owe to the ‘German spirit’ respectively the ‘cosmopolitan idea’. As Reichwein 2016 argues, the characteristic use of the survey as a discursive genre in Die literarische Welt is crucial with regard to its pluralistic objectives.

As the paper will outline, the functionalization of the periodical as polyphonous forum of debate together with the explicit notion of the critical and mature reader provides a strategy to map out a decidedly transnational understanding of literary citizenship.

The paper will be presented by Natalia Igl at the "Literary Citizenship" Conference (National Library of Norway, 25-27 September).

Literature comes in different shapes and sizes – and in the form of different media. The great importance of periodicals and illustrated magazines as media of literature has yet long been overlooked.

This 1-day workshop is aimed at researchers interested in questions of materiality and mediality of literature in general and reader engagement in magazine cultures from the 18th century and beyond in particular. The event includes a public lecture at the National Library by Prof. Gustav Frank (LMU Munich), expert on periodical studies and visual culture, who will join us in the workshop. We particularly invite postdoctoral researchers and PhD candidates to participate, share their ideas and research questions and profit from the international networking opportunity.

Periodicals are agents of change – and the specific compositional, material, and social practices that shape and result from their production, distribution, and reception are manifestations of the inseparable interrelationship of media and ideas. Looking into the perspectival and semiotic complexity of periodicals and how the multiple voices of magazines work helps us to understand more about the ways in which literary media address and involve their readers.

As material and multimodal media that combine different semiotic modes or resources, periodicals have multifaceted and complex means to engage their readers not just on an intellectual level, but also in their roles as onlookers and inter-actors with a magazine. The multimodality of illustrated periodicals, though, does not only refer to the eponymous presence of illustrations and images, respectively the general foregrounding of visuality in periodical print media since the 19th century. It also extends to the haptic experience a reader might have when browsing a magazine, turning its pages and experiencing the sensory effects of specific formats, paper qualities and textures. Against this backdrop, the workshop explores questions of materiality and mediality of literature in general and reader engagement in magazine cultures from the 18th century and beyond in particular. With respect to a diachronic perspective, shedding more light on historical print cultures not least contributes to our understanding of more recent phenomena and shifts in media culture(s) strategies of reader engagement since the digital age.

Public Lecture at the National Library

The specific features of printed mass media - such as seriality and the interplay of text and image - have had great impact on literary genre development and also on preferences of readers. This is not least true with regard to the novel and its current perception as prototypical manifestation of literature. The public lecture on periodicals and literature accordingly sheds light on how they historically shaped and responded to each other. By introducing the field of periodical studies to a broader audience the lecture also shows why 'literature' does not simply equal 'books'.

Literature comes in different shapes and sizes – and in the form of different media. The great importance of periodicals and illustrated magazines as media of literature has yet long been overlooked. The specific features of printed mass media – such as seriality and the interplay of text and image – have had great impact on literary genre development and also on preferences of readers. This is not least true with regard to the novel and its current perception as prototypical manifestation of literature. The public lecture on periodicals and literature accordingly sheds light on how they historically shaped and responded to each other. By introducing the field of periodical studies to a broader audience the lecture also shows why ‘literature’ does not simply equal ‘books’.

The lecture is jointly hosted by ILOS and the National Library’s research project “LitCit – Literary Citizens of the World”. The entrance is free of charge, all guests are welcome!

Vera Tobin, Associate Professor of Cognitive Science, sheds light on the cognitive structure of surprise and how readers deal with narratives that take an unexpected turn.

Looking Back With Surprise: Shifting Blame, Shifting Alliances, and the Problems of Atonement

When we look back from the end of a story — especially a surprising story — how, from what vantage, and with whom, do we observe our former reading selves? Is it with tenderness? Affection? Concern? Blame? Alienation? Annoyance? When stories of a certain sort seem to tell us one thing, then turn around and tell us something else, they often introduce a specter of misdoing. Someone around here has been unreliable, something has been inconsistent, somebody has somehow gotten things importantly wrong. The question then arises: who is to blame? Vera Tobin will discuss this specter as a source of cognitive trouble and a locus of narrative energy in a number of texts and their critical reception, with special attention to the case of Ian McEwan’s novel Atonement. As she will show, the cognitive structure of surprise can exert a substantial pressure on our feelings of allegiance and culpability in the readerly scene.

Vera Tobin is Associate Professor in the Department of Cognitive Science at Case Western Reserve University, where she studies cognitive bias, viewpoint in language, the problems of cooperation, and how literature and film engage our social cognition. Her first book, Elements of Surprise: Our Mental Limits and the Satisfactions of Plot, was published in spring 2018 by Harvard University Press.

Guest lecturer Vera Tobin will be joined by Karin Kukkonen, Professor of Comparative Literature at ILOS, and Ylva Østby, Postdoctoral Fellow at UiO’s Department of Psychology and expert on memory and cognition, for a panel discussion after her presentation.

In what ways does literature make use of materiality and mediality to sometimes radically engage readers? And what role does the socio-cognitive phenomenon of joint attention play at this?

This 2-day workshop is aimed at researchers interested in questions of how literary texts engage their readers and what role the socio-cognitive phenomenon of ‘joint attention’ plays at that. Against the backdrop of the turn toward a ‘new materialism’ in literary studies, the workshop sheds light on texts of different genres that make use of literature’s material, performative, and multi-sensory qualities to – sometimes radically – engage their readers.

The more recent claim to take into account “the power of matter and the ways it materializes in our ordinary experiences” (Coole & Frost 2010: 1) put forth a perspectival shift toward a ‘new materialism’ in literary theory. Bringing together the materialist and the cognitive perspective, the workshop focuses on the notion of ‘joint attention’ as a highly fruitful but yet underrated addition to the existing analytical tool-kit. The term refers to “the ability to share attention to some object with another person and mutually recognize that the attention is shared” (Tobin 2010: 185). As a basic phenomenon regarding the ways we process and socially interact within our material environment, joint attention also plays a crucial role in how we engage with literature. Vice versa, the phenomenon of joint attention can explain how literary texts utilize our socio-cognitive dispositions to engage readers in complex though processes, (self-)observations and emotions. Against this backdrop, the workshop looks into phenomena of (simulated) joint attention to understand how the interplay of textual strategies and cognitive principles enables intensive forms of reader engagement – particularly with regard to the current turn toward materiality.