The specific interdisciplinary and textual focus on the Constitution allowed us to explore new ways of analyzing citizens' participation in the evolution of democracy in Norway. Relying on methodologies that share an understanding of texts as social actions, we focused on investigating the textual processes involved in the creation of the Norwegian Constitution and its various transformations and interpretations during the last two centuries. A significant part of this investigation was to consider how the Constitution has evolved as a continuous dialogue with texts relating to international events in that period.

The focus on the textual qualities of the Constitution helped us scrutinize both its complex prehistory and its history of changes and interpretations. The textual focus enabled us to reveal citizens' actions and decisions on a micro-level, and to follow closely diachronic and transnational transformations.

Our project moved beyond mono-disciplinary approaches to the Norwegian Constitution to fuse knowledge generated in our respective realms of expertise and to expand research of the Constitution into textual research.

We planned to disseminate our research as an academic book published by an international publisher. Chapters in the book approach several interrelated dimensions of the Norwegian Constitution as a text:

The project was co-financed by 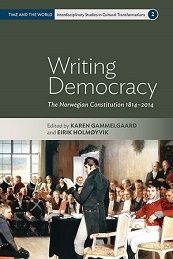