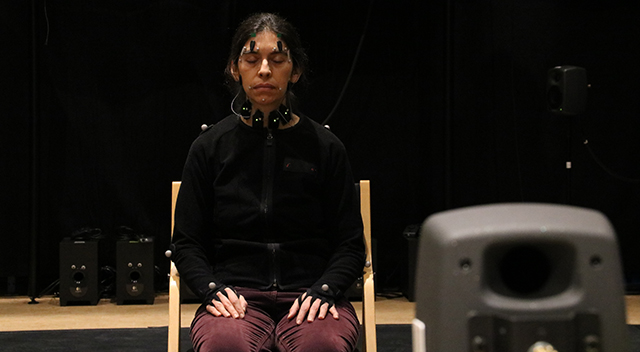 TESTS HERSELF: Researcher Ximena Alarcón Díaz uses infrared technology and electromyograms to investigate how the body moves while listening to stories of Colombian migrant women. "I have to do a lot of testing on myself before the experiment," she says.

Her eyes are closed. She listens to the voice from the speakers in deep concentration. Sensors measure how her body responds to what she hears.

"We don’t just listen with our ears, but with our whole body," says Ximena Alarcon Díaz.

She is a postdoctoral researcher in the Department of Musicology, and prepares the experiment in the Music and Motion Lab. This spring, nine Colombian women will visit the University of Oslo to participate. Alarcón Díaz will measure how their bodies react to hearing recordings of other migrant women from Colombia or they themselves talking about experiences from their migration.

“All these women have moved from Colombia to Europe. Their homeland was a country experiencing civil war and conflict, and the memories of this can be difficult to process. The goal of my research is to examine how listening can help people process memories”, says Alarcón Díaz.

Listening to thoughts and dreams

Her research project, INTIMAL, is based on the “deep listening” practice and philosophy developed by the American composer Pauline Oliveros. The goal of “deep listening” is to listen as broadly as possible to everything you hear, whatever you do. Listening is not just about your surroundings, but just as much about listening to your own thoughts, body and dreams.

“People who move from their home country often repress past memories. It may feel easier to start a new life in this way, but on the other hand it means that the grief over what was lost is never properly processed”, says Alarcón Díaz.

All migrants lose something

She has experienced this herself. Alarcón Díaz was born and raised in the capital of Colombia, Bogotá. In 2001, she left the country for good. She spent 16 years in London before moving to Oslo last year.

“Everyone who moves from their home country – whether voluntarily or involuntarily – experience a loss. It might be the friends you used to spend time with, the food you used to eat or the language you used daily," she says, continuing:

“For migrants from Colombia, this is also about another kind of loss – what we lost due to the terrible conflict in our country.”

The end of the conflict leads to new stories

Colombia is the country in the world with the most internally displaced persons after Syria. For over 50 years, there was an ongoing conflict between the country’s authorities and various militia and guerrilla groups. According to a state study from 2011, nearly 220,000 people have been killed in the conflict since 1959, and about 80 percent of these were unarmed civilians.

However, in 2016 the Colombian state and the leftist guerilla FARC signed a peace agreement. The peace process has led to calmer political conditions, and Alarcón Díaz believes this has a positive effect on her research project.

“The end of the conflict opens up for many new stories. Before, many people were afraid of talking about their experiences. Now we also have another perspective on what happened. This gives us the opportunity to listen to ourselves and our memories, and to connect with all of ourselves again.”

Wants to make a difference

In September, Alarcón Díaz was in Brussels, where she was awarded the prestigious Marie Skłodowska-Curie Scholarship for her research project. In addition to preparing the experiment with the nine women, she conducts interviews with Colombian women about their embodied experiences of migration.

She also uses an archive from the Commission of Colombian Women in Diaspora, a grassroots organisation that has been collecting and building an audio archive of testimonies of Colombian migrant women. Some of these stories will be played for the nine Colombians who visit the University of Oslo this spring. Alarcón Díaz is prepared for the wide range of emotions, and insights that this experiment could bring for women during the listening experiment.

"I hope my research can provide more knowledge about how people with a difficult past more easily can open up and start reworking memories they had previously repressed.”