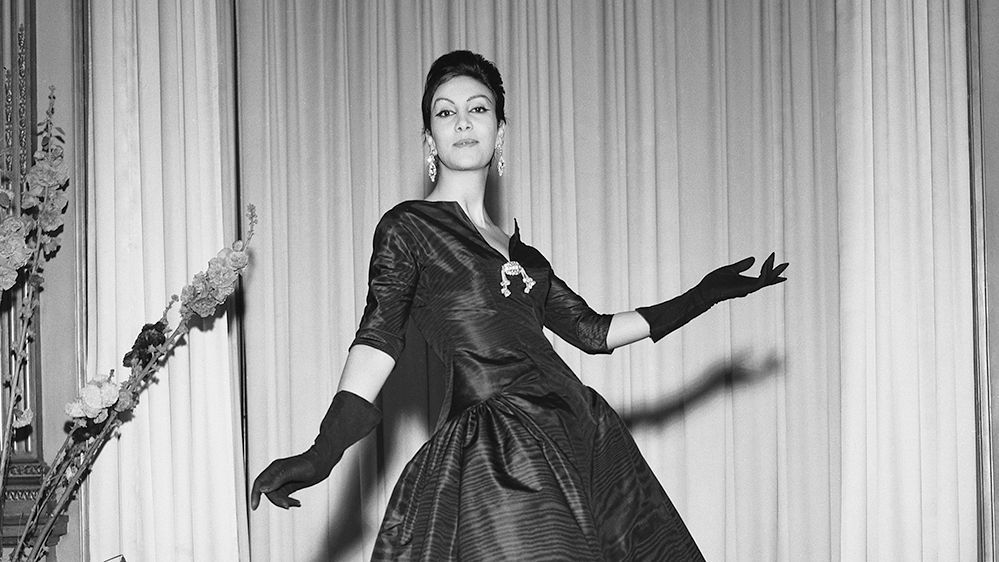 Parisian fashion has always been characterized by exclusivity and luxury. Here, a model poses in an elegant dress at a fashion show of Maggy Rouff's fashion house in Paris, 1958.

Today, fashion houses in London, Milan and Tokyo compete for the attention of fashion mongers around the world, but for over 100 years Paris and New York were by far the most important fashion cities. In her new book on the fashion industry in the 20th century, historian Véronique Pouillard shows how the two major cities competed, while they at the same time were interdependent.

“Paris has always had stronger protections for brand and copyright. This may explain why the brand names live on today,” says Pouillard.

Paris was the artistic and creative centre, known for haute couture - clothes made for an individual customer. Americans travelled across the Atlantic to seek inspiration from Parisian design for their mass-produced clothing. During the Second World War, the relationship between the two fashion metropoles was turned upside down.

“From the 19th century, clothing production and the artistic communities were closely connected. Artists within music, ballet, visual arts, and the groups surrounding them, inspired the fashion industry.”

In France, great emphasis was placed on the designer’s creation, and there was a societal consensus that fashion brands had to be protected by law. Pouillard has studied disputes, which often ended up in court, between fashion entrepreneurs and businesses that stole or pirated their designs.

“Over time, they had success building up the idea of authenticity and branding in France. If you emphasise innovation, you could say that monopoly should be limited, so it’s a delicate balance. However, this was also in the interests of the national economy, so the authorities supported the work of entrepreneurs.”

A more democratic approach to clothing was to be found in the United States.

"New York was the centre of a market where entrepreneurs were proud to offer clothes to everyone. During the interwar period, the majority of the US Congress believed that everyone should have the opportunity to dress as they wished, and they voted down a copyright law within fashion. Fashion democracy was a political ideal.”

In Paris to New York: The Transatlantic Fashion Industry in the Twentieth Century, Véronique Pouillard tells the story of the fashion industry in the 20th century.

The focus is on the role of entrepreneurs, designers and institutions in the fashion world's two most important cities: Paris and New York. 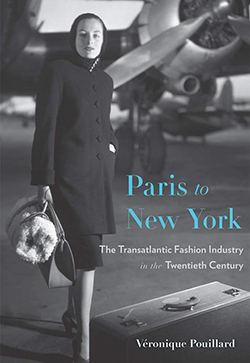 Read more about the book at the Harvard University Press website.

The Second World War – loss of textiles and customer groups

The flow of inspiration and ideas across the Atlantic came to an abrupt halt during the Second World War.

“The war became a small laboratory for Paris without New York and New York without Paris. New York was now gaining momentum to build itself up. Mayor Fiorello La Guardia used his political influence to support the fashion industry and in 1944 the Fashion Institute of Technology opened,” Pouillard says.

Some designers moved from France to New York, and became part of the resurgence. The war imposed its limitations, especially because fabric was being rationed.

“Nevertheless, it was an important time, where key entrepreneurs and designers in the United States gained more vitality.”

The history in Paris is very different. The customer group was now limited to the national market, the occupying power, and some neutral countries. Most of the country was governed by the Vichy regime, which cooperated with the Nazi occupiers. It was a goal of the regime that all companies should be “Aryanised”, i.e. they should not have Jewish employees or owners.

“In the archives, one can see in the documents of even small businesses that at one point had employed Jews were marked in red ink as ‘Aryanised’. It was a systematic policy.”

Pouillard points out that the industry was in a difficult situation.

“It was a question of responsibility, while at the same time about survival. The clothing manufacturers were not a war-supporting industry like the companies that  manufactured weapons for the enemy, for example.”

However, they faced other issues.

“For example, is it right to produce luxury in a time of war, when so many people are struggling and when textiles are rationed?”

With rationing and poverty, the clothes of the French changed.

“We see that the designs become narrower. Yet, what primarily characterises the clothes during the war is the recycling of all materials. People used wood or straw for shoes, and people repaired what was damaged. For most people, it was a rather bitter lesson in sustainability,” says Pouillard.

However, this did not apply to everyone. Around 60 textile houses were granted exemptions from the rationing, and with the war profiteers, a market arose where customers had a lot of money on their hands.

“After the war, many firms were investigated, and the archives show that a number of companies had huge turnover. Some companies claimed they were coerced, but it appears as if it was rather a case of realpolitik.”

“Fashion houses that were exempt from rationing found resources, including on the black market. So you could still find clothes with pleats and draped dresses with a lot of fabric. And not to mention, very big hats! It has been argued that the idea behind them was mostly to tease the occupiers and strengthen morale,” Pouillard points out.

The Americans were more uncompromising, and wanted nothing to do with the Nazis and the occupation regime. The few Americans who visited France brought back the latest from the world of fashion.

“In the stories you can read in the press, it is clear that Americans were astonished to see the draped dresses. Rationing was better respected in the United States.”

France has always had a better protection of brands and copyright than the United States. During the Second World War, a law on haute couture was also introduced.

“In 1943, haute couture became a protected appellation, a quality system similar to that used for French cheese and wine. This way, the fashion companies secured yet another legal tool that they could use to sue those who produced cheap fashion and referred to it as haute couture.”

In the post-war period, branding became important capital in the industry. It also provided new products.

“Dior’s lipstick is a good example. The lipstick is a mass-manufactured product, but the capital is in the Dior brand,” Pouillard says.

The historian sees that this strategy was first established during the Depression in the interwar period, when few people could afford to indulge in expensive luxury.

“At that time, more companies started experimenting with fragrance, and saw that it is the way to capitalise on a well-known name.”

Chanel’s legendary perfume Chanel no. 5 was an early example of this creative economic strategy.

Sustainability thrown under the bus

Today, the fashion industry has an important climate problem. Pouillard believes that the industry has developed in the wrong direction.

“The democratic ideal in the United States was, admittedly, a consumer democracy, where access to consumption was an important part of being an American citizen. It wasn't just about clothes, but it also included the buying of cars, houses, and furniture – as well as going to the mall.”

However, as the historian points out, there is a distinction between democracy – to produce for everyone, and neoliberalism – that the market controls everything.

“The model of democratic fashion was quite sustainable. It meant having a limited number of clothes, but of good quality and made hopefully with a sense of social responsibility. Everything was not better in the past, for example there were also social problems for the workers at the time. But this has assumed completely new dimensions in neoliberalism.”

In the past, the fashion seasons were slow. The same style, whether skirt length or waist shape, would last for six to eight years.

“Nowadays we have fast fashion, fashion that is discarded very quickly and is not reused. The entire production chain is so complex that companies are no longer in control of it. They give contracts and sub-contracts to those that are offering the cheapest deliveries, which puts pressure on the workers. It is not sustainable.”

Pouillard believes it gives hope to look to history.

“If we look at it from a longer time perspective, we can see that the fashion system we have now is probably, and hopefully, not permanent. I don't think anyone in rich Western countries will need $2 t-shirts in the future.”

Véronique Pouillard is Professor of History at the Department of Archeology, Conservation and History (IAKH) at the University of Oslo. Her field of interest is modern history with emphasis on economic history and legal and cultural history.