This research project dealt with the events of 1814 and their importance for Norway and Northern Europe. 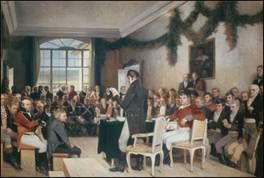 The year 1814 is often regarded as the starting point of Norway as a modern nation. The abolishment of autocracy and the founding of a national state apparatus which introduced a constitutional political order and established human rights for all citizens, became decisive preconditions for today’s Norwegian democracy.

But the results of 1814 were not achieved in a simple and easy way. As in other parts of Europe, the new political goals would only be reached through political struggle, and sometimes in open rebellion against Great Power politics.

As almost the sole country in post-Napoleonic Europe, however, Norway was able to retain its new political order relatively unaffected even after the Congress of Vienna. Following a brief period as a fully sovereign state, Norway became a practically autonomous kingdom within a Swedish-Norwegian union, sharing only king and foreign policy with Sweden.

A central task for the 1814-project, was to discuss why the Norwegian rebellion of 1814 and the new constitution ended up as a historical success. We also had to ask why the main political results of 1814 were allowed to persist and even to be further advanced inside the union during the 19th Century, and mostly in a peaceful way.

A closer inquiry into this unusual position – at least by inter-European political standards – should be of interest not only to Norwegians, but to Europeans in general. What were the immediate consequences for the political, social and cultural relations in Norway and the other Nordic countries, and what about the more far-reaching consequences? Certainly, not everybody was keen to embrace the new political system.

Furthermore, the integration of diverse social and political forces into this system had to take time. The history of the Nordic countries during the 19th and 20th Century is therefore a history of social and political struggle, of ideological dissentions, and of outsider positions. A true historical account of the consequences of 1814 must take account on these «other voices» too, even though they seldom met with the same success as the «Founding Fathers at Eidsvoll», as they are often named.

Our project had participants at all university levels, from bachelor students to professors and senior scholars. Our plans included advising bachelor's and master's theses, supervising PhD dissertations and postdoctoral projects, presenting scholarly publications and archive studies and network publishing.