The Roman East necropolis, in which also the apostle Philip was buried, was the object of the investigations of the University of Oslo. 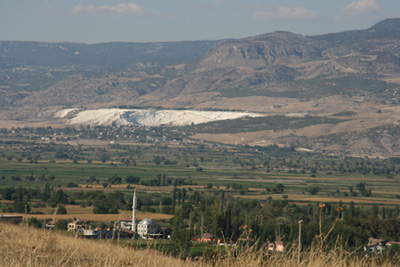 Excavations of selected graves was undertaken in order to establish chronological fix-points both for the growth of the necropolis and for its reuse in later periods. The preserved skeletons opened up for a long series of studies about the ancient population, both along traditional lines on sex, age, nutrition, bone malformations, diseases, but also involving DNA- and isotope-studies. For this part of the project a collaboration was established with the Institute of Biology at the University of Oslo.

The field seasons of 2007 and 2008 brought forward some important results. Immediately to the west of the Martyrion of St. Philip lies a Byzantine burial ground, but unfortunately badly preserved. One Roman funerary building (C92) close by was opened and appeared full with skeletons lying helter-skelter. Among these appeared a Byzantine cross in bronze and 5 pilgrim badges of metal, badges identified with European pilgrimage places (Rocamadour and Noblat in France, perhaps Cologne in Germany, and Rome). The date of the badges to the early 14th century may demonstrate the longevity of the Martyrion as a cult and pilgrimage place, even at a time when the area was under full control of the Seldjuks.

The purpose of the project is to map all visible remains of sarcophagi and funerary monuments in an attempt to understand the “urban” lay-out of the necropolis and its social composition.

Since 2007, on the invitation of the director of the Italian Archaeological Mission at Hierapolis, prof. Francesco D’Andria, the Department of Archaeology, Conservation and History, University of Oslo, has participated in the excavation of the Hellenistic-Roman-Byzantine town Hierapolis, excavations which were started by the architect Paolo Verzone of the Politecnico di Torino in 1957. 10 Italian and 4 international universities and research institutions were involved in the excavations and collateral research, each with their own defined project, each with their own funding.

Hierapolis is situated where the fertile river-valleys Lykos and Meander meet, at the western end of the Anatolian mountainous plateau. Pamukkale is the modern name of the nearest village, which lies close to Denizli, some 200 km east of Izmir. Hierapolis was founded around 200 BC, became part of the Roman province of Asia Minor few generations later; it prospered in the Imperial and early Byzantine periods, but after a severe earthquake in the 7th century AD it never recovered. The following centuries are characterized by gradual decline, squatting, and periods of reoccupation, from the 11th/12th century perhaps also of Turkish Seldjuks.

Hierapolis covers an area roughly the size of Pompeii (ca. 65 ha) and is surrounded by large, well-preserved necropoleis on three sides, to the north, east, and south. The Greek name Hierapolis means “The holy city”, probably referring to an oracular shrine of Apollo in the centre of the town. After emperor Theodosius’ ban on pagan cults in AD 391, in the early 5th century was established a new pilgrimage centre of the town by monumentalizing the tomb of the apostle Philip east of the town. A large building, the Martyrion of St. Philip, was raised above the grave

A study of funerary material from the Hellenistic-Roman-Byzantine town Hierapolis in Phrygia, Turkey.

Contributors to the 2009 excavation and succeeding study season at the Norwegian institute in Rome:

The project is backed by Norway’s Ministry of Foreign Affairs and the Turkish Embassy in Oslo as an important element in establishing closer cultural and academic contacts between Norway and Turkey.

Collaborating institutions at the University of Oslo:

Director of the Norwegian Excavation Project at Hierapolis: