The Norwegian Naxos survey started in October 2010 with a campaign to survey and record the archaeology of Kastro Apalirou: The fortified mountain town that might have functioned as the capital of Naxos in the mid to late Byzantine periods. 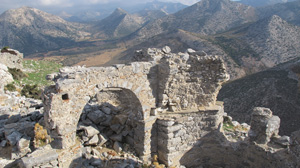 Remains of the church complex from the south

The survey focuses on how economic and political changes can be seen in the landscape, and in particular the changes that occurred from the Middle Byzantine period (565 -1081 AD) to the Venetian period (1206-mid 16th century AD).

The main objective of the survey was to map and document Kastro Apalirou and to understand the relationship between settlement patterns, political authority and the economy of the island. The first task was to document the extant remains on Kastro Apalirou, which are made up of a fortified circuit wall, over 40 cisterns some of which are exceptionally large, a religious-complex, and numerous buildings. The main structures have been recorded by total station survey, and a plan of the site has been built up. A photographic survey has been made and extensive field notes have also been taken. In order to understand the function and form of the kastro there are several questions concerning the political, administrative and religious structure of Naxos that need to be answered. What functions did Apalirou have? Was it a refuge for the secular elite in times of threat? Or was it settled over longer periods? Was Apalirou a defensive site for Naxos alone? Or did it perform a wider role in the Cyclades?  Whilst the main objective and focus is Kastro Apalirou we intend to expand our field work to the surrounding landscape and create a laboratory of historical and archaeological research on the transition from Antiquity to the Middle Ages.

The island of Naxos in the Cyclades has for long been renowned for its rich Byzantine heritage, and in particular the numerous, decorated churches. The settlement pattern of Byzantine Naxos has been far less studied, although some important centers have for long been known and structures are indeed still visible. In 2010 an archaeological team from The Museum of Cultural History and the Department of Archaeology, Conservation and History at the University of Oslo initiated a pioneer project of mapping and documentation of the most important of these centers, Kastro Apalirou.

In the aftermath of the 4th Crusade, the Venetian Marco Sanudo in 1206 or 1207 landed on Naxos and immediately laid siege to what seems to have been the main Byzantine fortress on the island, Kastro Apalirou. After a five-week siege, Sanudo conquered the site, took over the island and later expanded his realm to the neighboring islands to create a Venetian and Catholic Duchy in the central Cyclades. The Venetian conquest was followed by a feudal reorganization of the islands.

When Kastro Apalirou was founded as the main fortified centre on Naxos is another and far more difficult question to answer. Since it is evident that this fortified hilltop site in the interior is far easier to defend than any coastal settlements on Naxos, a foundation in the 7. - 8.th century AD seems possible, at a time when the Byzantine empire had largely lost her supremacy at sea. Raiding and piracy grew out of control and as a consequence many coastal regions and islands in the Aegean were depopulated and left deserted until stable conditions returned.