Using the Past in the Past. Viking Age Scandinavia as a Renaissance?

This project will explore how and why the past was used in Viking Age Scandinavia, the 9th to mid 11th century AD. 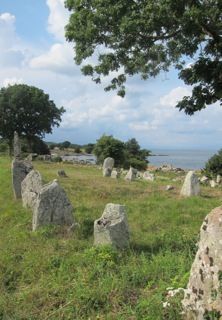 Compared to earlier periods of prehistory, the accentuation of the past increased significantly in the Viking Age. In the Carolingian Renaissance the Christian Roman Empire of the 4th century AD was used as an ideal and referential point.

In contrast the Viking Age, an oral and not a written society, did not use a single period, but rediscovered and referenced multiple pasts, either materially or referentially, through material culture. Thus far, only burials have been studied with the purpose of exploring the use of the past in the Viking Age.

In the project other types of structures will also be examined in order to explore the use of the past comprehensively with varying levels and scales.

The recycling of material culture of the past in the Viking Age will be examined in the reiteration of grave monuments at settlements and central places; it will explore the raising of rune stones as a means of creating places for commemoration; and it will be investigated through the utilisation of antique artefacts and objects that stylistically referred to previous centuries in the Viking Age.

The analyses will explore how past monuments and artefacts were recycled materially and referentially in this period; the different strategies of constructing places for commemoration; and the choice of objects to be preserved through centuries in order to enhance new interpretational frames of utilizing the past in the past.

As this use of the past in the Viking Age was a central, active element in the mentality and world-view, and took shape in political and social processes, the project has the scope to provide new insights into the fundamental social and cultural changes, including the changes in Old Norse belief system in the centuries prior to the conversion to Christianity, and the gradual progression toward state formation.

This also means that the results from the project will combine two research traditions that are often separated in Viking Age Research.

The Project is financed by The Research Council of Norway, FRIPRO 2016-2020 as Young ResearchTalent.