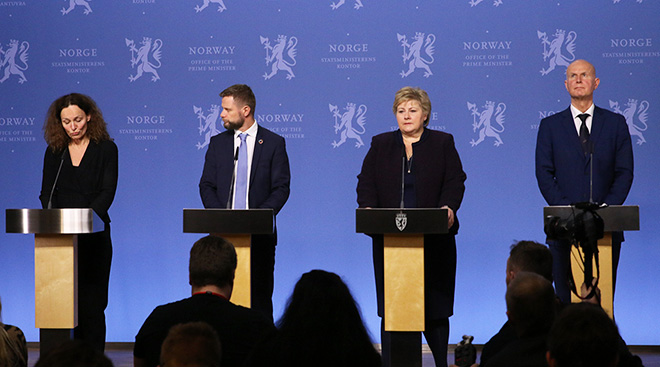 How far into the private lives of its citizens can the government intervene, when the aim is to protect people from disease? How much should each individual sacrifice for the benefit of the common good?

In light of the current covid-19 pandemic, questions challenging the moral compass of both individuals and authorities are flourishing. Within philosophy, such dilemmas are well known.

“How one understand these questions, depends to a large extent on how one envisages the role of government,” says Alejandra Mancilla, Associate Professor of political philosophy at the University of Oslo.

“In the liberal democratic tradition, the government is the representative of the people, and its purpose is to secure the people’s rights – liberty and security most prominently among them,” she says.

The government implements the will of the people

When a crisis occurs, a number of the common rules of democracy are put aside. However, as Alejandra Mancilla points out, the authorities still have to govern according to the will of the people.

“Even if exceptional measures are taken, these will be taken because the people have authorized them for this kind of situation,” she says.

However, “the people” is comprised of a myriad of individuals with different opinions.

“Therefore the liberal tradition soon runs into trouble in crises like this, where the authority will never fulfill the will of all, and where dissenters can neutralize and even work against the government’s measures.”

How one understands the role of government, will guide the citizens reactions to new measures. Mancilla refers to South Korea, where the spread of the coronavirus has been controlled through comprehensive surveillance measures and harsh individual punishments.

“The Confucian tradition sees the ruler as a father-like figure, and the ruled as children who owe him obedience and respect. When one ascribes to government this top-down, paternalistic role, it is much easier to accept this kind of measures.”

Experts are more efficient than democracy

Elected leaders rely on professional expertise in order to make decisions about what measures and restrictions to implement. At the University of Oslo, Sebastian Watzl, director of the Centre for Philosophy and the Sciences (CPS), believes that the current crisis brings forth questions about the role of expertise in policymaking.

“Basic liberties, such as freedom of movement, have been suspended on the basis of expert advice. We see massive policy changes being implemented directly on the basis of what experts say  – for the sake of the common good, but without the typical democratic decision making process.”

According to Watzl, epistocratic rule – the rule of experts, has the advantage of a short reaction time and the fact that experts are better suited to make decisions about what is best for the common good. However, he warns of the dangers.

“What if the experts disagree? Who are the relevant experts? Epidemiologists only, or also economists or people working on education or other topics? And what if most people don’t agree with the experts?”

When to reopen schools, is a current example of a decision that has to be made based on limited evidence. At some point, Watzl says, German and Norwegian experts had reached different conclusions about the role of children in spreading the virus.

“Both sets of experts had the same evidence in front of them. But they came to quite different conclusions: the Germans thought that children potentially play a major role in the transmission of the virus, the Norwegians that they probably play only a fairly small role.”

“How should the respective sides react to the fact that another group of experts comes to the opposite conclusion on the basis of the same evidence? Should they lower their confidence that they are right?”

The issues are not new

Philosophy becomes highly relevant in situations of crisis because the relationship between the people and the power of the state is put to the test, according to Alejandra Mancilla.

“It is not that philosophy will lead to immediate transformation, but it can shed light on problems that were not considered as problems before, or it can help to remind us that ‘new’ problems are not really that new.”

Mancilla can think of many who have discussed the current dilemmas throughout philosophy’s history. John Stuart Mill, the 19th century philosopher, is one.

“In his On Liberty, Mill defended the ‘harm principle’ as the only grounds for state intervention in the private lives of citizens. Because his definition of ‘harm’ was left infamously vague, however, one can still debate today whether the Norwegian state is ‘harming’ those banned from travelling to their cabin, or whether nudging citizens to download an app like Smittestopp ‘harms’ their privacy,” says Mancilla.

We are turning over our freedom

In the 1970s, French philosopher Michel Foucault developed his theory on governmentality, where the governing of the citizen’s bodies and health is central. What Foucault wrote on biopolitics speaks to the situation we are in today, according to Mancilla.

“Governments display the use of technologies for surveillance and control over whole populations while invoking the public good. The power of the authority to control the bodies of its subjects is something we do not tend to think about under normal circumstances, but it has come to the fore again thanks to this pandemic,” she says.

Sebastian Watzl looks back even further.

“The philosopher Thomas Hobbes proposes that we have reasons to obey the rule of a Sovereign who makes it impossible for us, by law and with punishment, to make certain choices. But that, of course, is in conflict with individual freedom.”

“Whereas Rousseau, for example, suggests that the individual can think from the perspective of what he calls ‘the general will’. He thinks that if the right procedures are in play for generating that general will then it is rational for the individual to act according to it, and she is no less free.”

A classic conflict between the individual and the community

“It often seems individually rational to make decisions that lead to bad outcomes for everyone,” says Sebastian Watzl.

“If you are 20 and healthy why not go and get a drink with your friends? Or why is it wrong to fly to go on vacation if it’s just me?”

In philosophy such dilemmas are often discussed by referring to Garett Hardin’s The tragedy of the commons.

“According to the story, the commons were an area in English towns where farms would bring their sheep for grazing. For each farmer it is rational to bring one more sheep to the commons. But if everyone does that, there soon is no grass left and then everyone is suffering.”

Another thought experiment is John Rawls’ veil of ignorance. Rawls argued that if you were to design policies without knowing your own position in society, you would choose to make policies that minimize the bad outcomes for those who are in the worst position.

“Arguably, some of the current decision making has been driven by a similar thinking: we are minimizing the risk for those who are affected in the worst way,” says Watzl.

A possibility for change

Even though the virus does not care whether you are rich or poor, the effects of infection control measures do. Alejandra Mancilla thinks that the crisis has highlighted problems of poverty and socioeconomic inequality.

“Here in Norway the ‘worst’ that has happened to many people in these days of confinement is to combine home schooling with working from home. For millions of others in less fortunate countries it has been to look starvation in the face. Living in a welfare state that provides a ‘safety mattress’ in times of uncertainty is not something that everyone enjoys worldwide,” she says.

Mancilla has suggestions as to what should be on the to-do-lists of state leaders when the current crisis is over.

“The Corona crisis should remind us how much remains to be done in terms of global access to at least a minimal package of resources for leading a decent human life. Talk of establishing a Universal Basic Income (UBI) has gained renewed strength these days, as well as the right to universal healthcare.”

Another aspect Mancilla finds interesting is how the crisis has led to a stronger critique of global capitalism.

“The momentum for establishing a Green Pact for the world should not be lost once things start going back to normal. Could this lead to a new economic model that can sustain humans and non-humans without depleting the planet?”

The virus outbreak steals all the attention

What topics deserve our attention? That question engages Sebastian Watzl as a philosopher.

“Many people are devoting a staggering amount of time to update themselves on the latest number of deaths or hospitalizations from Covid-19, for instance. The fact that we all pay a lot of attention to those facts influences public decision making.”

He questions the rationality of doing so.

“I think it has something to do with whether certain facts necessitate immediate decisions and response. That might explain why we are paying so much more attention to the effects of the coronavirus than, say, to climate change and its consequences.”

These days, many people are having feelings of fear and isolation. Philosopher Alejandra Mancilla recommends two texts that can help calm the mind.

“A Stoic, Emperor Marcus Aurelius condenses in the Meditations the main ideas of this Hellenistic school of philosophy, which aimed at teaching people how to stay calm in the middle of external turmoil and internal anxiety. The goal was to reach ataraxia, a state of serenity. Literally, it teaches how not to be disturbed.”

“Marcus Aurelius himself lived through the Antonine Plague that killed 5 million people in the Roman Empire! He knew very well what death meant. He wrote: ‘Do not act as if thou were going to live ten thousand years. Death hangs over thee. While thou livest, while it is in thy power, be good’.”

“Although coming from an entirely different tradition, the Tao Te Ching shares with the Meditations the idea that there is no point in trying to control what is around us and that, at best, what we can try to do is to flow with nature, with the tao (the way).”

“Both texts underline how the best of life can be found in the simplest things—a message worth keeping in mind when we slowly start getting back to our ‘normal’, complicated daily lives.”