The project constructed, and published online, a database forming a repertory of conjectures made on the Opera of Horace. 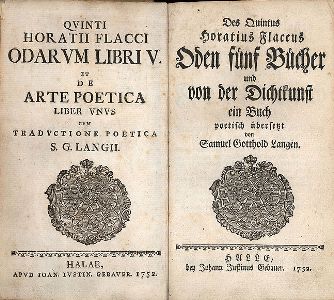 The works of the Roman poet Horace (65-8 BC) are part of the literary canon of the Western culture. They are also among the most influential poems of all times.

In spite of this, there is to this day no consensus as to their exact wording. The oldest text witnesses are ninth-century manuscripts.

Scribes and scholars have questioned the authenticity of the transmitted text and proposed conjectures aimed at a reconstruction of the lost original.

Conjectures have naturally been proposed on all preserved classical Greek and Latin texts, and, due to the longevity of classical philology, they have often been presented and discussed in publications that are by now old or obscure or virtually unknown. For a few authors, notably Aeschylos and Propertius, there are Repertories of conjectures published in book-form.

For Horace there was no such tool. It was thus impossible for modern scholars to get a comprehensive view of the critical work that has been done on the transmitted text of Horace's works during centuries of intense scholarship.

The project constructed, and published online, a database forming a repertory of conjectures made on the Opera of Horace from ca. 1500 up to the present time.

The database consists of more than 6.500 conjectures.

Read more about the Repertory of Conjectures on Horace.

The Project was financed by The Bank of Sweden Tercentenary Foundation and carried out at the University of Oslo since August 2002.