The Refined Audition: Music and Speech conference brought together philosophers and scientists to examine the similarities and differences between these two forms of auditory perception. 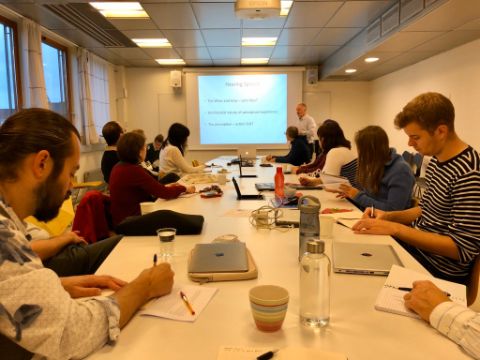 Attendees at the Refined Audition conference

The first conference of the Perceiving Representations project on the topic of music and speech perception took place on 14–15 November 2019.

The event commenced with Casey O’Callaghan (University of Washington in St. Louis) who presented a paper on pitch perception that examined the distinction between ‘refined’ and basic forms of perception.

Next was Elvira Di Bona (Polonsky Fellow, Van Leer Jerusalem Institute) on the musical ‘chimeras’ generated when a single melodic or harmonic figure is split across two or more instruments.

Bruno Laeng of the University of Oslo’s RITMO centre presented his research on using pupillometry to measure and compare mental effort in actual and imagined musical performances.

Alistair Isaac (University of Edinburgh) rounded off the first day with a discussion of how meter is used to convey meaning in music and poetry, and the use of rubato in harpsichord music.

Barry C. Smith (Institute of Philosophy, University of London) examined competing hypotheses about the nature of speech perception and its links to Chomskyan generative grammar.

Next, Simon Høffding of RITMO (UiO) presented his multidisciplinary research on what expert musicians perceive while they are performing.

Finally, Matthew Nudds (University of Warwick) gave a new account of the perception of musical structure according to which sounds are structured by the events that produce them.

The conference closed with a roundtable discussion of the methodological, conceptual and metaphysical issues raised during the conference, and the opportunities that these present for future research.

Thanks to everyone who presented and attended, and to our funders, the Norwegian Research council, for making this event possible.