Symbolic saviour of an endangered species

The story about Knut, the polar bear from Berlin, tells us something about our times, our relationship with animals and our outlook on the environment. 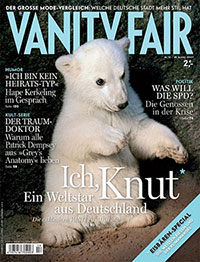 Knut on the cover of German Vanity Fair, March 2007.

In 2006 Berlin Zoo saw the birth of their first polar bear cub in 33 years. A retired circus polar bear gave birth to two cubs at the zoo. One of them died soon after, but Knut survived. At only a month old he became the popular focus of newspaper attention for the first time. In the course of a relatively short period, Knut from Berlin became an international media celebrity.

- I have studied this apparently superficial story about Knut the polar bear cub in order to say something more fundamental about the place and significance of animals in our society, says Guro Flinterud. Her analysis of the story reveals that it encompasses a number of different narratives about ourselves and about contemporary culture.

- In our Western culture, we tend to underestimate animals. We influence them and we personalise them, but in turn, they influence us. Animals, pets as well as those we see at the zoo, have an impact on us. They are more important to society than we think.

A symbol in the fight against global warming

Animals as Objects and Animals as Signs is the title of a major research project funded by the Norwegian Research Council and undertaken by the Department of Culture Studies and Oriental Languages at the University of Oslo. Guro Flinterud’s PhD thesis forms part of this project.

- Could one say that Knut and other animals meet different needs within ourselves?

- Yes, that’s right. There is a lot of psychology involved here.

Environmentalists came to see Knut as a symbol of their fight against global warming. 2007 was the year when the Nobel Peace Prize was awarded to the UN climate panel. The climate and global warming were front-page news, and Knut became a symbolic saviour of the polar bear as an endangered species.

- The media presented Knut as if he gave the world new hope, says Flinterud. She tells us that the German Environment Minister actually adopted Knut. The Minister became a sponsor against using Knut in promotional campaigns. Greenpeace also made use of the polar bear. Pictures of Knut were manipulated; one of them even ended up on the cover of Vanity Fair, the fashion magazine.

Knut ”talked” to his fans in his own blog

Many people developed a personal and almost intimate relationship with Knut, says Flinterud. She has analysed a vast body of material consisting of media stories, press cuttings, blog contributions, campaign notes and more from Germany and other countries. She has also interviewed the journalists who “spoke” on Knut’s behalf in a blog set up by a local TV channel in Berlin. 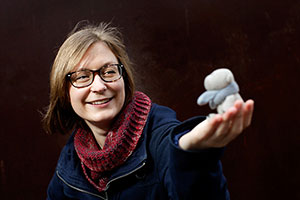 - The media presented Knut as a child celebrity. When he was young he was described as sweet and innocent. Later on, when he developed like any other normal polar bear into a large and apparently aggressive animal who posed a threat to human beings, he was branded a problematic teenager. He was even called a psychopath!

Knut the Polar Bear became a popular culture phenomenon and was perceived as such, explains Flinterud. Her earlier work has also focused on popular culture: her Masters dissertation was about celebrities and music fans. The PhD thesis about Knut the polyphonic polar bear celebrity is a multidisciplinary research project based on cultural history as well as media studies.

- Are there any similarities between music fans and Knut’s fans?

- Many. In both cases, the sense of community is what is most important to the fans. Knut’s fans referred to themselves as ”knutians”. Mature ladies from all over the world visited Knut’s blog every day to check up on his latest news, and to meet likeminded people. A form of madness, I thought at first. But in the end, I believe this is all about game-playing, and that this particular game has a serious side to it. It was environmental concerns and animal welfare that brought them together, but the blog allowed them to develop a unique way of communicating.

We use animals as an affirmation of our own perceptions

Knut became a symbol for anti-zoo protesters – and for zoo lovers. This helps explain, says Flinterud, why these days zoos are being criticised on the one hand, needing to justify their existence, while simultaneously being the most visited entertainment facilities worldwide.

- In Norway we have a slightly different take on zoos, and our legislation with respect to animals in captivity is more stringent. In Germany, however, and in many other countries, the general public’s relationship with zoos has never changed very much. The one in Berlin still enjoys very high visitor numbers, even though Knut is no longer alive.

Flinterud has also included other famous animals in her thesis, among them Clara the Rhinoceros; she arrived in the Netherlands towards the end of the 18th century. Jumbo the Elephant in London Zoo is another one; he was around in the late 19th century.

- Animals as objects of fascination are not a new phenomenon. But even animals become celebrities within a specific cultural framework. Jumbo was referred to as “A Gentle Giant”, which is a reference to the British Empire. The fact that Knut is a polar bear is important to our understanding of his significance. Knut is a celebrity animal of our times both because his species is significant in the environmental debate, but also because his behaviour can be interpreted into the myth of the child star.

Knut’s story is special in that it became a global phenomenon – thanks to the internet and social media.

- Why is this an important topic for research?

- Because it is useful for us to realise how our knowledge of animals is formed, and how popular culture phenomena and scientific facts are mixed. The narratives I have found demonstrate that we use animals as an affirmation of our own perceptions of how things are. At the same time, however, animals have a formative influence on us, Guro Flinterud points out.