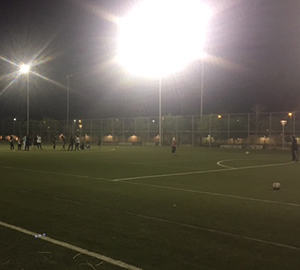 Charlotte Lysa has followed members of the Riyadh Women’s Football League while working on her thesis. (Photo: Charlotte Lysa)

Saudi Arabia plays its second match today at the FIFA World Cup. After a 5-0 loss to the host nation of Russia, they will now meet Uruguay.

“Interest in football is high in Saudi Arabia. The national league is very popular and when the big teams play, traffic comes to a halt. Making it to the World Cup is a great achievement for Saudi Arabia,” says PhD candidate Charlotte Lysa at the Department of Cultural Studies and Oriental Languages.

But for Saudi women, it hasn’t been as easy to cultivate their interest in football – neither as spectators nor as athletes. In January this year, they won a historic victory on home turf when the ban on women at football stadiums was lifted. For the first time, women could be seen among the spectators.

The past year has seen a number of changes that have given Saudi women greater freedom. Behind these changes is the young crown prince of Saudi Arabia, Mohammed bin Salman. His father, King Salman, took over power in Saudi Arabia three years ago. In June last year he appointed his son Mohammed crown prince and successor. Since then, the crown prince has been in a hurry to modernise Saudi Arabia. Among other things, this means more rights for women, who are now allowed to drive a car, attend football games, and exercise at separate fitness centres for women.

However, much remains to be done. Women’s rights activists are fighting an uphill battle in Saudi Arabia, says Lysa.

“Saudi women still live under a guardianship system that means that they are subject to a male guardian in many areas. While the day when women will be permitted to drive a car is approaching, the Saudi authorities continue to arrest a number of women’s rights activists. Even though it’s become easier to be a woman in Saudi Arabia, there’s no room for women’s rights activists.”

“We have a young crown prince who has big plans and is in a hurry. But power structures are complex. You don’t change social attitudes the same day you issue a royal decree. It’s hard to say how much social change in general is created by allowing women to attend football matches. At the same time, the signal it sends should not be underestimated, and for the women it is invaluable. They feel they are getting support,” says Lysa.

Lysa has stayed several times in Qatar and Saudi Arabia. Among other things, she was a visiting student at the embassy in Saudi Arabia for six months in 2014. In connection with her PhD, she has followed a university league in Qatar, the Women´s University Football Cup, and a league in Saudi Arabia, the Riyadh Women’s Football League.

“I have interviewed the women at depth and also been with them at practice, matches and tournaments. I’ve been sitting on the sidelines and observed. Their motivation for being involved in football varies. Some just want to be physically active and hang out with their friends, while others see it as a calling and want to contribute something to society.”

The league in Saudi Arabia was started ten years ago. The women who started the league have been obliged to keep a low profile, so as not to provoke sanctions, says Lysa.

The legalities are unclear. There is no law in Saudi Arabia prohibiting women from playing football. It’s all about interpretation and about not stepping on anyone’s toes.

“Most of it is a question of interpretation. For example, renting stadiums or football pitches to women has not been permitted; they have been licensed for use by men only. Connecting women’s football with immoral activities can give rise to crackdowns. After the first match, the event was severely criticised. As a result, the women choose to keep a lower profile,” says Lysa.

According to the women, the biggest problem has not been the royal family, but conservative religious forces.

“As early as 2014, the girls told me that the authorities were aware of them, and supported them, if not directly. They have always talked about society or the conservative forces with which they must strike a balance,” said the researcher, elaborating:

“It’s the conservative forces, the religious powers-that-be, such as the former religious police who can make trouble and force other authorities to revoke permits and prohibit renting the pitch. You could say that women’s football hasn’t been illegal – but it hasn’t been explicitly legal either,” says Lysa.

It has therefore been absolutely necessary for the female football players to lay low.

“For example, they haven’t been able to apply for a licence. Without a licence, the authorities can say that the activity is illegal, if they are of a mind to do so. Travelling – as when they travel for matches – is not acceptable for women. If it gets out that a group of women is travelling around without a guardian, there can be problems. The activity is not unlawful, but many aspects could cross the legal line.”

Keeping it secret from the family

There is also another dimension: individual secrecy.

“Many of the girls I spoke with have fathers, brothers and spouses who support them. They’ve grown up playing football with their brothers. They talk a lot about having supportive environments around them, and that men their age praise them. But in the beginning there were many who kept it a secret, some even from their immediate family. It is still very common not to advertise the fact that you play football to your employer and extended family. It’s not explicit secrecy, they explained their reasons along the lines of ‘it’s none of their business,’ or ‘I don’t know how they would react,’” says Lysa.

“I asked one of the girls I interviewed about what men their age thought about this. She thought it was different for them, because they were the 90s generation – they get it. But she also told me that if she opened the comment fields it wasn’t so easy to get to sleep afterwards.”

“When the starting point is that women are not supposed to play football, they are pushing the envelope just by doing so. Football has been viewed as a masculine activity. The idea of girls wanting to play football broke with the notion of gender identity. It’s a balancing act, where women operate in a borderland. While many of them have the support of their fathers and brothers, the opinions of their neighbours or boss have to be taken into consideration. If they push too hard, they will be criticised.”

The female soccer players must find a balance between not sticking their necks out too much, while also trying to raise public awareness.

“While keeping a low profile, they are also actively working to change attitudes, such as by being coaches for children, boys and girls, or participating with the teams at charity events, which makes playing football more palatable,” Lysa points out.

The interest in the link between football and social change arose when she wrote her master’s thesis on the FIFA World Cup in Qatar. The thesis addressed how Qatar used the World Cup as part of the country’s foreign policy strategy.

“Sport as cultural expression is very interesting. It’s exciting to analyse sports events from a political and social perspective. Football becomes a lens we can use to study social change,” she says.

There are major differences between the two countries’ attitude towards women and football.

“In Qatar, women are allowed to play football, and is also something the authorities encourage. At the same time, the social sanctions are much harsher. In Saudi Arabia, society is much larger, whileQatar is a small society where reputation means a lot. It is the social sanctions you have to fear. Although women are allowed to go to football matches in Qatar, you will hardly ever see it. It’s allowed but not accepted. Instead, the women sit at home and watch football on TV, or go to a football game when they are travelling abroad.”

Lysa is in no doubt that the royal family of Saudi Arabia is serious about making it easier for women to be physically active. Obesity and health problems among women are some of the reasons for it, she maintains.

“Not only is it extremely expensive to have a segregated society. It is also a society with globally high rates of diabetes and other lifestyle diseases. A new course is crucial. It’s not just about sports, but also about health.

“The Vice-President of Women’s Affairs at the General Sports Authority, Princess Reema, is a member of the royal family. She has a background from the charity sector and from the private sector, and is working hard to include women in sports. She has worked a lot on women’s health, placing a focus on breast cancer, and has also worked to increase the percentage of women in the nation’s workforce. The fact that a person with her competence has been placed in a position of power lends legitimacy. It sends a signal that the changes will extend beyond creating sports opportunities for women, and that the initiatives will focus on the grassroots and sport for the masses. There is a desire to activate the population to a much greater extent as part of a comprehensive plan,” explains the researcher.

This is why fitness centres for women, which were previously prohibited, are now permitted.

“Fitness centres did in fact exist, but they were operated without a licence. Operators had to be creative and call it something else. Many people held a licence for something else, like a café or spa, which served as a front-end business, while it was in reality a fitness centre. They didn’t actually operate in secret, but were also not very confrontational. It was not a total ban that was enforced very strictly,” she explains.

Although fitness centres for women are now allowed, it is important to operate them without arousing offence.

“One of the fitness centres made a commercial that showed women dancing in ordinary workout clothes. Someone picked up the video, which went viral. In the end, the centre was closed. That says something about the conflict,” concludes Lysa.

Much has happened since Lysa started working on the subject in 2014.

“When I first came into contact with the players in 2014, a different king was in power, and there was nothing to indicate that major changes were on the way. What has happened represents a great opportunity for these women. When the signals from the top are as strong as they now are, the balance of power has shifted enough to provide the women with more freedom to promote their activities. While they still haven’t been licensed as football teams, they have been licensed as sports groups. This makes it harder to criticise them for promoting their activities, for actively recruiting players and for talking about their victories and challenges in social and traditional media,” Lysa explains.

The researcher believes there is reason to hope that the pace of social change has been much faster than thought.

“I looked through my notes from 2014, from the first time I met some of these girls. When I asked one of them if she thought there would ever be an official women’s league, she answered that she hoped it would happen, but that she thought it would take a long time, maybe 20 years. And now they’re almost there,” says Lysa.