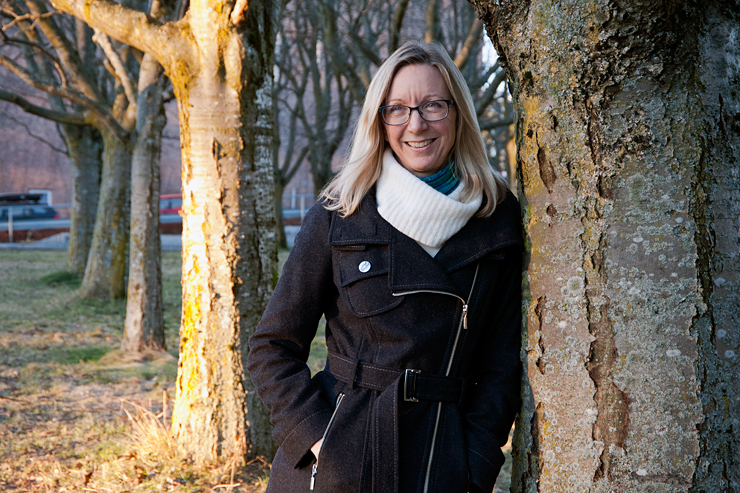 ‘I think that all of us can sense a feeling of guilt when we become aware of those who are less privileged than ourselves,’ says Elisabeth Oxfeldt, project leader and professor of Nordic Literature. (Photo: Alf Øksdal)

First there were beggars who were a blot on our idyllic landscape, sitting on the pavement with their coin-collecting cups in towns and villages. Now it is especially refugees who make us feel guilty. Refugees on TV, refugees fleeing from war, on their way to Europe and to Denmark, Sweden and Norway – and the refugees we encounter in our immediate environment.

The stark contrast between these people and ourselves causes us to count our blessings that we are so privileged. However, we also feel discomfort.

‘Feelings of guilt are a symptom of the discomfort we feel about global injustice.’

We know that Norway, Sweden and Denmark continuously come close to the top in international rankings that show that life is good here. We know that even though many citizens in Scandinavia struggle, on average we are much better off than very many other countries, with benefits such as gender equality, wealth, democracy, welfare, security and health.

The same rankings also show the countries at the bottom of the scale, and all the things that they lack.

Researchers are launching the concept of ‘Scandinavian guilt’ to explain why citizens in Scandinavia feel guilt and shame in the face of those who are not as privileged as us. What feelings of guilt are involved? Are they feelings that we attempt to suppress and explain away? How do such feelings function, socially and politically? Do they create fellowship, at the cost of the underprivileged others who are excluded?

International, multidisciplinary research from 2014 to 2019 on Scandinavian feelings of guilt in an age of globalization. Purpose:

The researchers’ aim has never been to possess all the answers. They have researched narratives about guilt and privilege across disciplines, and from different disciplines including literature, education, film, sociology, moral philosophy, media and gender studies.

They now hope that the results can take the discussion on global justice further – both in academia and in the public space.

‘Narratives about guilt can lead to positive changes in our society if they result in raising awareness and transforming feelings of guilt into social action,’ says project leader Elisabeth Oxfeldt.

The difference is more visible

As a researcher with the title of professor and a sunny top-floor office at Blindern, she herself has sensed a feeling of guilt in the course of the project. Together with younger researchers, all falling within the category of privileged Scandinavians, she celebrated with a cautious toast during the dinner that marked the launch of the book ‘Scandinavian Narratives of Guilt and Privilege in an Age of Globalization’.

‘Although not everyone wants to admit it, I think that most of us can sense a feeling of guilt. It happens when we pay attention to the huge inequalities. Immigration, globalization and the media make this something that we have to relate to. Those who are less well-off are becoming more visible, in the media as well as in our own neighbourhoods,’ she says.

‘You are constantly aware that you actually live an extremely privileged life, as if in a bubble. What effect does this have on us, and how is it expressed? There is a wealth of films and literature that tackle these issues, addressing topics such as emotions and emotional communities. Here we can observe the same ambivalent feelings related to guilt. The question of guilt has a long history, and philosophical theories about guilt in the aftermath of the Second World War provide a relevant example. However, we wanted to investigate what happens in our present time, here and now. How do we perceive the others now? And what effect does this have on us?

The ghosts of our time

A work by Derrida about ghosts that fail to disappear because of an unpaid debt set her thinking about the others who live among us here and now, like ghosts that confront us. She also found these ghost-like figures in Norwegian literature, such as in Ingvar Ambjørnsen’s book ‘The Night Dreams of the Day’. In it the reader meets Sune who leaves his family and society to live off what he finds in other people’s cabins in the forest. Here he suddenly encounters an Asian woman, a refugee who has run away from an asylum centre, whom he unwillingly has to help and relate to.

‘Our position is that a feeling of guilt is not something negative that should be concealed, but something to be examined and reflected upon. It is easy to say that we are a pietistic society and therefore easily tend towards feelings of guilt, but are there other reasons to feel guilty? If a reason for it exists – for example, that today’s skewed wealth distribution is due to global power structures, the relics of colonialism and other circumstances that have led to us being on ‘top of the world’ – then feelings of guilt serve a purpose. If we consider historical and global factors, there may be good reason to feel guilty,’ she says.

‘What do we do with our guilt, do we suppress it?’

‘It is immensely complex, as these feelings colour our self-image at an individual as well as a national level. Look at our national fundraising appeals, are they just a matter of our self-image? Of showing how good we are at helping others? It’s easy to be critical of national campaigns such as these, which call for a voluntary effort and for generosity, despite our uncertainty that all the money donated reaches its target. On the other hand, it’s good to bring up one’s children to go around with charity collection boxes and teach them to think not only of themselves,’ says Oxfeldt.

Despite all the emotions of ambivalence and uncertainty that we feel when we encounter the less privileged, she is nevertheless convinced that narratives about the others, in films and literature, may help to establish an attitude that enables us to step out of our comfort zone and regard others with consideration and empathy.

Studies of the various narratives about guilt and privilege are presented in eleven articles in ‘Scandinavian Narratives of Guilt and Privilege in an Age of Globalization’, which are published in Open Access and are freely available (in Norwegian).

The researchers have addressed TV series, films, detective and other novels, poetry, autobiographies, material for schools as part of ‘Operation Day’s Work’, political speeches and other narratives about the imbalanced relationship between ourselves who are fortunate others who are underprivileged.

The chapters portray very different narratives about Scandinavian feelings of guilt, with analyses that pinpoint what we gladly accept guilt and responsibility for – and what we refuse to accept guilt for.