When the Latin written culture was introduced in Scandinavia, it encountered an old native tradition based on the local vernacular and the runic script. 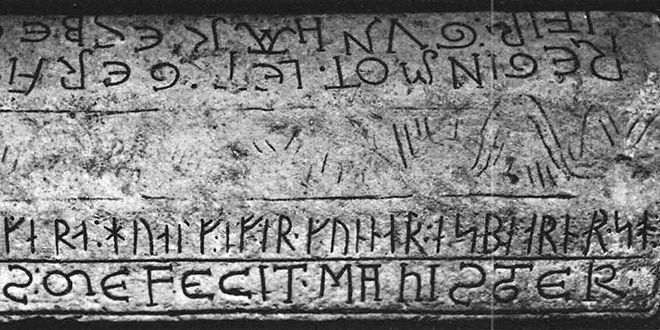 The use of different languages and scripts is at the core of the development of literate societies in medieval Europe.

In this context, Scandinavia represents a unique case where the Latin written culture, introduced gradually from the end of the 11th century, encountered an 800-year-old native tradition based on the local vernacular and the runic script.

The adoption of the Latin language and the Roman alphabet revolutionised literacy practices in the North. From a basically monolingual and monoscriptal written culture, the Scandinavian societies, or at least parts of their strata, became multilingual and multiscriptal.

This led to a centuries-long coexistence of the two traditions, to the contemporaneous use of two languages and scripts in the textual sources and to their mutual influence.

The purpose of the project "Language switching and script mixing: Multilingual landscapes of medieval Scandinavia" is to:

The project focuses on epigraphic sources from medieval Scandinavia where such a meeting of written traditions is attested.

On the one hand, these choices say something about the language and script proficiency of the producers of the texts, and of their intended receivers. On the other hand, they also have important sociolinguistic and cultural implications.

In fact, the choices made by medieval Scandinavian writers also bear witness to the mutual status of the languages and scripts involved. Moreover, they can be explained with different ideological presuppositions and purposes, or with different ways of presenting the self or the community identity.

In order to survey and interpret this variance, the project employs an interdisciplinary approach which combines analytical tools from epigraphy, sociolinguistics and linguistic landscape studies.

This approach aims to yield new insights in both the multilingual and multiscriptal proficiency of the medieval Scandinavian carvers, and in the cultural and ideological processes behind the emerging of new writing practices.

Moreover, the project also seeks to explain the significance of the Scandinavian case in a broader European context, by investigating how multilingual and multiscriptal writing in the North relate to similar phenomena in the rest of medieval Europe.

This project receives funding from the European Union’s Horizon 2020 research and innovation programme under the Marie Skłodowska-Curie grant agreement No. 839290.