Catherine Bradley has been granted funds from the European Union to trace the history of a single musical moment across 500 years. 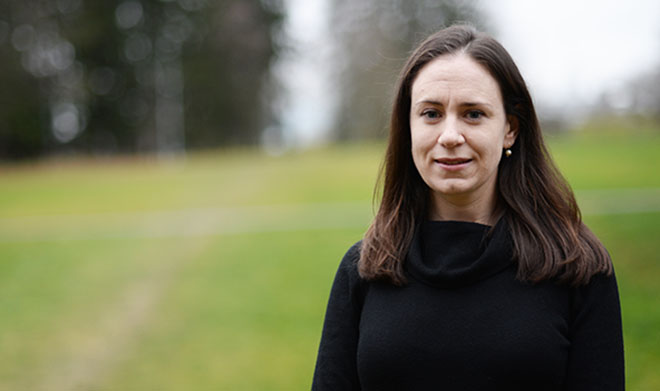 The joyful exclamation Benedicamus Domino, “Let us Praise the Lord”, sounded in song several times a day across the Christian West for more than half a millennium. Music historian and analyst Catherine Bradley is studying why and how Benedicamus Domino was a special moment of musical freedom and experimentation.

“I'm absolutely delighted to have been granted two million euros for my research project, and will use these funds to build up a research team to study musical and poetic creativity before 1500 here at the University of Oslo”, says Bradley, who is Associate Professor at the Department of Musicology.

Around the year 1000, singers of simple sacred melodies could choose to reprise a favorite tune from the Church music for the day, now re-texting this melody with the words Benedicamus Domino. This was an important moment of creative freedom for the singers.

Precisely this moment at the end of the church service later became very important for some of the earliest experiments in polyphonic song. In the years that followed, the flexibility of musical creations for this moment increased and the strophe found its way from sombre church services to popular songs and Christmas carols.

“The study explores how and why this particular ritual moment was at the centre of musical and poetic creativity throughout Europe during the period from 1000 to 1500. Although this is a sacred moment it also inspired music of a very secular nature that was sung in every-day popular contexts”, Bradley says.

“Instead of starting with a composer, a genre, or a place, this project thinks about a single musical moment. It therefore cuts across established historiographical and disciplinary boundaries, in order to reveal new and unsuspected connections and knowledge”, she continues.

The way medieval church singers experimented with Benedicamus Domino is relevant to understanding how music is being created today, and that is what this BENEDICAMUS project will illuminate.

“We will study how Benedicamus Domino became a catalyst for the musical and poetic techniques and genres that originated in the Middle Ages and the Renaissance, and that are still alive today,” she says.

The project will document half a millennium of musical and ritual activity, studying hundreds of musical compositions, poetic texts and manuscripts. These materials will provide a broad European perspective on musical and poetic genres that have never before been considered in conjunction.

Great news for the Faculty of Humanities

“It is incredibly positive that Catherine Bradley has received ERC funding for the BENEDICAMUS project,” says Frode Helland, Dean of the Faculty of Humanities, with satisfaction.

“Early music is a topic that doesn't always receive the same attention as musical genres that are more modern and fashionable, and we are delighted to see that the Faculty's researchers succeed with such projects”.

Helland explains that ERC funding is important to the Faculty of Humanities because it contributes to the Departments' finances.

“But also because such awards demonstrate that we can succeed in international competition – in arenas where only quality and boldness count”, he says.

Among the youngest to receive prestigious research funds

“The grant makes it possible to build up a Scandinavian environment for research into medieval and Renaissance culture here at the University of Oslo,” emphasizes Catherine Bradley.

The ERC particularly emphasized the originality of the research project, and called attention to Bradley's impressive merits as an international researcher. To be eligible for a consolidator grant, the researcher must have seven years of experience after completing a doctorate, and most of the grant winners are aged over 40. At the age of 34, Bradley is therefore one of the youngest to receive this kind of research funding.

Her monograph Polyphony in Medieval Paris: The Art of Composing with Plainchant (Cambridge University Press, 2018) recently received the Early Music Award of the American Musicological Society.

BENEDICAMUS receives 1,990,952 Euros from the European Research Council. The research project will run over a period of five years, and Catherine Bradley will recruit two postdoctoral fellows in four-year positions, two PhD fellows and a research assistant.

Read more about research projects funded by ERC at The Faculty of Humanities: