Harriet acquired an invaluable network through her exchange visit to India, which later allowed her to set up her own company. 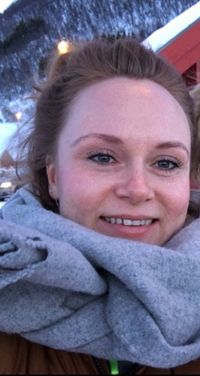 - What are the most important aspects of your job?

– Hoi Cottage Wool is a social entrepreneurial company which is engaged in wool production in small villages in northern India where we work closely with the workers and have a transparent, full production line in each village.

- How is the education from The Faculty of Humanities relevant to your job?

– It has obviously been invaluable. As a result of my Master’s studies I acquired a network in India which has enable me to build up a company - something which would not have happened without the background I acquired during my studies. My India studies have also opened up this world to me in a way which would otherwise have been extremely hard to gain access to. I simply would not have been able to start an Indian-based company without having been familiar with the area - I am convinced that it would have been almost impossible. Thanks to my studies I was also offered a job with the Immigration and Consular Department at the Norwegian Embassy in New Delhi, something which enabled me to develop my own company in India while I was working.

- What  is your best memory of your exchange visit?

– Well actually it was a feeling rather than a memory: about the day when I really felt that I belonged in Delhi. The day when I felt that “this is my town now, just like Oslo”. It was lovely to be able to move around the city when I arrived there in the same relaxed way that I would when going from Oslo S to Blindern. To be quite honest, I never really thought that that day would ever arrive.”

- What’s your best tip for new students who are concerned about their job opportunities after graduation?

– My advice is to make the study your own, especially when you reach Masters level. Find your own direction - it doesn’t need to be inspired by Spivak or by women’s and caste issues. There are many options and opportunities available. I progressed from writing about South Asia as an Indocentric region for my Bacherlor’s thesis to embarking on a career in wool production after I completed my studies. The choices are endless and the road becomes apparent as you proceed - generally in the area around Lodi Colony and Khan Market.