Equality has always been the best remedy against famine

Cold and rain may have triggered the food shortage of the Little Ice Age, but the human factor turned it into catastrophe of historic dimensions. 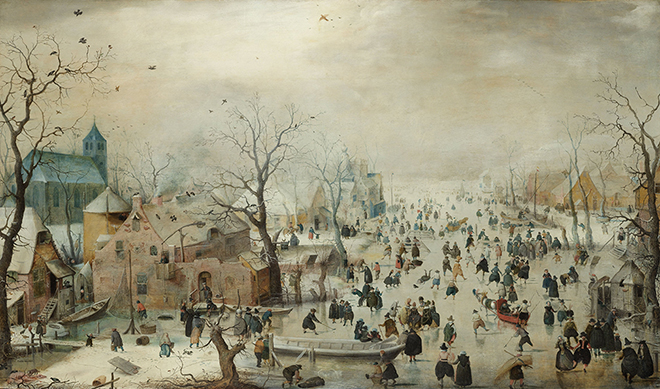 During the period known as the Little Ice Age, temperatures dropped. This painting by Hendrick Avercamp is inspired by the cold periods, when people could ice skate on rivers and lakes in the Netherlands.

Rain, rain and more rain. After 100 days of rain, the crop fails. Food is running out. First for some, then for all. Starving people start eating grass and bark. Desperate children form bread out of clay and eat these substitutes to quench their nagging hunger. Families break apart, some flee, others stay. And many, many people die.

In the two-year period of 1770 to 1772, famine ravages Europe. Extreme weather, but also social conditions, trigger the disaster.

“Historians tend to assume that nature is the static, slow moving backdrop to the political turmoil in everyday life. In a famine it can be the other way around, with long societal structures that escalate a quick natural impulse into a catastrophe,” says Dominik Collet, professor of environmental history at the University of Oslo.

Collet studies historical famines and understands them as ‘socionatural’ disasters that combined environmental and man-made factors.

“For a long time, famines have been understood as almost exclusively natural phenomena. A lot of rain or extreme heat causes the harvest to shrink and people starve. But there is more to it,” he says.

Hunger in the Little Ice Age

During the famine, crops failed for three years in a row, halving the annual grain harvests. As a result of starvation and hunger-related disease, one million people died across Europe, more than in all the wars of the 18th century combined.

“It rained excessively in the months when it would usually be dry. The extreme cold shortened the growing season by just three weeks, but that can be dramatic,” says Collet.

The 1770s mark the tail end of the cool climatic period known as the Little Ice Age.

“Even though these climatic changes are natural and much slower than the changes we are seeing now, they reached a similar magnitude, a 1.5 C˚ change. Like today, they manifested themselves mainly through a sharp increase in extreme events.”

Escape and epidemics across Europe

The main killer during a famine is not starvation but the spread of epidemics. In poor and crowded conditions, they take hold quickly. Where help is not available, people flee and transport the disease across political and social borders.

“Migration was not permitted at the time, because the authorities wanted to keep taxpayers where they were. But desperate people travel nevertheless. Some go to the cities, where they have a greater chance of being seen and heard,” Collet says.

Many embark on much longer journeys.

“The Second Schwabian Trek from Germany to Hungary includes a substantial number of people. Quite a few go to America. They are establishing the pathways that will be crucial for emigration from Europe in the 19th century.”

The famine is also a common trigger for major social changes.

“There are revolts in Ireland and France. There is the First Partition of Poland. There is reform in the German Empire. You would not relate these issues to each other if you weren't aware that there is a shared factor. The climate anomaly and its bad harvests might be that common explainer.”

In the 1770s, Europe is in the Age of Enlightenment, and traditional religious explanations coexist with new material and technological approaches. Collet believes that the famine may have acted as a catalyst for progressive ideas.

“New sciences such as meteorology and classical economics gain the legitimacy they need to establish themselves. The desire for school and welfare reform had been talked about for a long time, but it is only when people see hordes of hungry, poor children in the streets, that it is forced into action.”

It is not just an act of kindness. When diseases such as typhoid spread, they affect both wealthy citizens and the poor and malnourished. During the crisis they become a powerful reminder that health reform and welfare are in everyone's interest. Because money is required to set up schools or workhouses, the middle classes started fundraising initiatives.

“It is an early version of humanitarianism, where, for example, Jewish communities in Poland send money to Germany to feed starving Protestant children there.”

To expect radical political or social changes right after a crisis is still asking for too much, argues Collet.

“People are not wired that way. They want a return to normality and peace. However, a few years later, when new conflicts arose, the subtle changes introduced during the famine years had important consequences. The political centralization and increased participation we see in those years can be understood as the unintended consequence of the earlier famine relief efforts.”

Famine is a man-made disaster

Changes in the environment and climate trigger a famine, with major consequences. But the severity of the consequences also depends on the social and political conditions.

“Often you see social structures that preempt or prefigure a famine with large groups being disenfranchised or on the margin. Environmental shocks challenge these already fragile systems. These can be quick and sharp such as in an earthquake or a volcano eruption. A famine is a comparably slow disaster, taking a year or two to develop. That gives people a lot of room for action, there's always the possibility to respond or not to respond,” says Collet.

How society is organized is decisive for which strategies are implemented.

“Today we can look back and assess what worked and what didn’t. Of course, the luxury of a calm decision was not available to people in the middle of it.”

Collet connects his results to the Indian economist Amartya Sen, who suggests the best way to avoid famines today, is democracy, participation and a free press. This is supported by the most important lessons from previous crises, according to the history professor.

“You can have new technologies, green revolutions, genetic engineering and more, but in the end what matters is that the affected people can have their voices heard,” he says.

“Smaller states often did better, for instance. They had a greater room for participation and a closer connection to their citizens. This could weigh more heavily than mere economic power.”

Hunger is an effective weapon

The European states handled the famines differently. The sources Collet studies show that people were agile and creative.

“In diaries of the period you can read about self-help, and neighborly cooperation. Through the newspapers, people were raising substantial donations. People also bypassed unwilling local authorities and wrote directly to the king asking for help. The sovereigns power to intervene was often limited, but petitions to the king served as a way to spur local notables into action to take better care of the citizens,” he says.

“It is almost an involuntary modernization of the state, as people defy the local authorities in favor of the courts and streamline the whole process of governance, whether it is legal or not.”

Hunger makes an impression, both at the individual level through heartbreaking descriptions of misery, and as a political tool in the face of power.

“When citizens appear in front of the king to say ‘I'm starving’, it is the worst testimonial you can get as a ruler. If you cannot feed your subjects, your rule is threatened. People knew how to use this as a bartering tool and claim rights that they did not otherwise have.”

In the same way that hunger today is linked to war and conflict, famine also became a political weapon in the 1770s. Collet points to the fate of Poland.

“There was internal conflict bordering on a civil war. The countries around Poland abuse the climate anomaly and the resulting famine to force their interests. They occupy parts of Poland under the pretext of preventing the spread of epidemics. Eventually these supposed health measures are made permanent and the country is partitioned. Disease prevention became a screen to hide power politics.”

History can guide our response to climate change

In the 18th century, people were writing more than ever. For historians, this provides a particularly rich source material of public documents, newspapers and diaries. These “archives of society” detail the reactions of the people. However, in order to get a complete picture, it is important to use other sources as well, says Collet. He often works with scientists that use the “archives of nature”- tree-rings, ice-cores and sediments.

“If you only study one part of a phenomenon, you'll never get the full picture.” he says, and continues:

“The instrumental records that we have go back maybe 100 years or so. When you use indirect ‘proxy’ measurements from ice cores or the tree rings, you can go back a lot longer than that. But they are not very precise. However, if you combine them with historical records, you can do much better, and improve both the reconstructions, and in turn, the predictions.”

“History shows us that there is rarely one single factor that explains dramatic events. The worst famines do not simply happen when it is extremely dry or wet, or when you have inequality and war, but when they overlap.”

For researchers like Collet, who look at how humans have dealt with climate crises in the past, the future is not necessarily bleak.

“People always had a variety of strategies at their disposal that they either pursued or ignored. We are not just passive recipients of climate change, and that gives us a little hope. If they could find a way to improve their lot, so can we.”

Dominik Collet is Professor of Environmental and Climate History at the Department of Archeology, Conservation and History (IAKH) at the University of Oslo. His latest book is Die doppelte Katastrophe. Klima und Kultur in der europäischen Hungerkrise 1770-1772 [The twin catastrophe. Culture and climate in the European Famine of 1770-1772]. He is part of the Oslo School of Environmental Humanities (OSEH) Working Group.