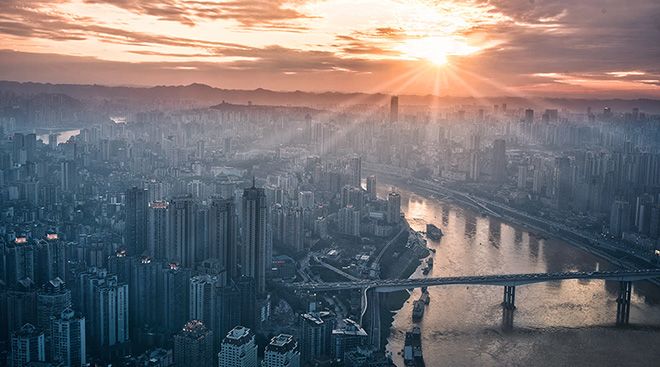 Population growth and globalisation fuel speculation about the future in a lot of science fiction, says researcher Bodhisattva Chattopadhyay.

A new virus appears through mutation in a remote corner of the world. First one person gets infected, then three. It spreads via buses, airports, shopping malls and hospitals, and suddenly it has paralysed the whole world. A terrifying, but sadly topical scenario – and also a classic science fiction storyline.

“If there was anyone who was not surprised by the coronavirus outbreak, it was science fiction fans. We have been reading about epidemics and lockdowns as a result of globalisation for years,” says Bodhisattva Chattopadhyay.

Chattopadhyay is an associate professor at the Department of Culture Studies and Oriental Languages (IKOS) at the University of Oslo, Norway, and science fiction researcher. He is interested in how narratives about the future can help provide answers to some of today’s most contentious issues.

Science fiction or Future fiction can take many forms: literature, computer games, art, TV series and films; and these imaginative stories are often set in alternative realities where science has run amok. In his research, Chattopadhyay focuses on stories about the future, so-called future fiction, or speculative fiction.

“Literature in this genre speculates about our future as a species. But it is also, as  Ursula K, Le Guin put it, descriptive. The authors do not try to predict what society will be like; rather, they extend the tendencies they see here and now into the future,” he says.

The alternative scenarios thus depend on the dominant concerns in the authors’ contemporary society. Recent future fiction is dominated by three main topics.

“Much of the science fiction produced over the past two decades concerns climate change, population growth and technological developments. Mass surveillance is also strongly present.”

Another decisive factor is where in the world the author is writing from.

“Surveillance is a popular topic in a lot of Chinese science fiction at the moment. Going back in time, we see that different parts of the Soviet Union were concerned with the same issue in the 1980s.”

In addition, new technology creates new problems. In The Waste Tide from 2013, the story is set in Guiyu in China, a landfill site for electronic waste.

“The place has been dubbed Silicon Isle, as a counterpoint to the place where technology is produced – Silicon Valley. Even as recently as the 1990s, electronic waste wasn’t a huge issue. Now with the explosion in the consumption of electronics, there are vast areas that have no function other than to break down the electronic waste.”

In his research, Bodhisattva Chattopadhyay looks at science fiction written outside the English-speaking world.

“The genre is often thought to have originated in Anglo-American culture. A few works translated from French, Russian and Japanese are sometimes included. The science fiction written in Bangla that I present is unknown to many, even though it is a language spoken by nearly 250 million people in India and Bangladesh.”

The fact that what is considered important literature often omits anything not written in English is not unique to science fiction. But since this genre is closely linked to advances in research and science, Chattopadhyay believes much of the ignorance stems from the prevailing views of science and knowledge.

“There is a general conception that poor countries in the global south don’t do science; instead they do mysticism – dream catchers, etcetera. Of course, research is not as intensive in countries with few resources, but science is being pursued in more places than the rich north. And the same is also true of science fiction writing,” he says.

Similarly, it is not widely known that Norway has a tradition of speculative fiction.

An important figure in a great deal of science fiction is the alien: an intruder from the universe beyond Earth, often in the form of dangerous monsters that humanity must fight. The alien, the outsider or the stranger, can also be understood in light of the fact that the genre’s history is told from the perspective of Western colonialism.

“A lot of science fiction is based on fairy tales, where the protagonist sets off on a journey into the unknown. It may be another planet, a lost civilisation, or an unknown tribe living deep in the jungles of Africa. This is of course related to colonial history.”

Who is assigned the role of the stranger, the “alien”, depends on whom the writers think of as the “others” at any given time.

“In early American science fiction, for example, there was a lot of concern about the Yellow Peril. With the spread of coronavirus, this form of xenophobia has returned. The fact that #chinesevirus has become a hashtag reflects a long history of racism against people of Chinese, Vietnamese, Filipino and Japanese origins in the USA.”

Playing with the alien figure

Although the genre is riddled with scary monsters, Chattopadhyay also finds many examples of the stranger playing a more positive role.

“A lot of science fiction from other parts of the world features the friendly alien. Here, the alien may be big and scary-looking and could easily eat you if it wanted to, but it is actually sweet and kind.”

For example, the African American writer Octavia Butler writes about the species Oankali, which has a plan to help us Earthlings. Chattopadhyay points to another example, which also illustrates the function the “other” can play in science fiction, taken from The Three Body Problem. The book, written by Chinese writer Cixin Liu, became the first Asian novel to win the prestigious Hugo Prize in 2015.

“The Three Body Problem is part of a trilogy about the planet Trisolaris, in which a technologically superior species travels to Earth to take over our planet. However, the story is not really so much about what the Trisolarans do, but rather what the humans do once they learn about the existence of Trisolaris. Although they are a potential threat, no physical encounters with the Trisolarans are ever actually described in the book.”

In many stories, the main threat is not from any being outside the Earth, but from the planet itself. According to Chattopadhyay, this takes place in a number of different ways.

“If you look at the aliens in many films and comic books, they look like giant insects. This is linked to the advent of microscope technology in the 17th century. The threats in many science fiction works are often these kinds of creatures that exist in nature,” he says.

“Whereas in disaster films, such as 2012 or The Day After Tomorrow, we see that the planet we live on appears to have a will of its own and strikes back at us.”

Again, the scenarios envisaged are related to where the author is writing from. Like in Hollywood films, or how the relationship between humans and the Earth is an important topic in Indigenous futurisms.

“Here it is often explicitly stated that humans have done something to the planet, and that this must be fixed by re-establishing the natural balance.”

“Here you fly the Thunderbird through Indigenous lands destroyed by oil sands and massive oil pipelines, fire lightning bolts at the oil companies’ machinery, and bring damaged nature and wildlife back to life.”

Both the current epidemic and the climate crisis have been predicted by numerous authors. Chattopadhyay therefore also believes that a lot can be learned from reading science fiction.

“Many places have already felt the effects of climate change for some time now. In India, for example, there is flooding in one part of the country and drought in another at almost any given time. And then there are the people living with deforestation, not to mention the recent wildfires in Australia. By expanding the perspective from our lives to larger regional networks, we can understand how people deal with climate change.”

“This is where the speculative part comes in. Many stories from places with few resources are very inventive. You see examples of creative use of technology – like in a South Asian context where a washing machine is used as a juice blender.”

He also points to instances in stories of what is called “leapfrogging” in innovation studies: a piece of technology that has already been developed by others is linked up to something else, thereby skipping many stages of development.

“This is how we need to innovate in respect of the climate crisis. We can’t turn back time, so we have to look at where we already are and try to find creative solutions.”

Bodhisattva Chattopadhyay is an associate professor at the Department of Culture Studies and Oriental Languages (IKOS) at the University of Oslo, Norway. He conducts research into science fiction, and is head of the projects CoFutures – Roads to Possible Presents and Science Fictionality.