Rock Art and Lands of Identitiy in Mesolithic Northern Europe. 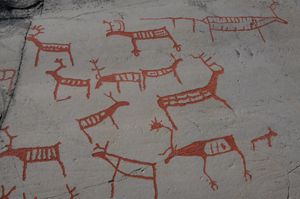 Hunters’ rock art of Mesolithic and Early Neolithic age on the Scandinavian peninsula are the primary source material of this project. The study was accompanied with investigations of quarries and raw material use.

Meetings Make History aimed at making rock art a useful source material for investigations of the historical dynamics of Mesolithic northern Europe. An effort was made to make rock art the basis for studying developments in the ideology and sociology of Mesolithic societies through approaches connected to the concepts of animism and totemic. A methodology is modeled to discern animic and totemism figural elements.

Animism and totemism are regarded two main types of hunter-gatherer world views that are not mutually exclusive; however, specific contexts may be said to be dominated by either one.

Differences in rock art styles between regions are seen to express local origins and local belonging of the meetings groups. Still, figural compositions appearing at rock art sites throughout the entire investigation area express some common “pan-nordic” beliefs that get their local expression. However, a few discernible figural elements – investigated as social markers – habitually appears in small numbers at rock art sites far away from their area of origin.

Thus, a core issue of the project was to approach rock art and rock art sites such like Vingen, western Norway, Alta, northern Norway and Nämforsen northern Sweden, as venues of great meetings between groups of different social belonging and landscapes. The social developments triggered by meetings, gift exchange, marriage and alliance were investigated as integral parts of the interregional and social / ideological developments during the Mesolithic.