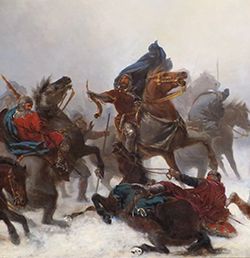 The ‘civil wars’ started around 1130 in Denmark, Norway, and Sweden. In Denmark they ended c. 1160, whereas in Norway and Sweden they continued until the middle of the 13th century, when strife reappeared in Denmark. In Iceland, ‘civil wars’ raged in the period 1220-1262/64. Similar conflicts occurred in other European kingdoms. In order to gain new perspectives on the ‘civil wars’ in the Nordic Middle Ages, we want to use some of the ideas and theories that have been put forward regarding the ‘civil wars’ in Europe in the Middle Ages and ‘civil wars’ fought in different places across the world in the last 50 years.

The social elite will be the focus of our enquiry, because its members possessed the most important positions in society, and their decisions and networks affected the political development decisively. Some key questions we raises are:

We will adopt a cross-disciplinary and comparative perspective. By co-operating with medieval scholars working on English, French and German medieval history, we will gain a deeper understanding of how the Nordic ‘civil wars’ can be situated in a broader contemporary European context. This perspective has been almost completely lacking in earlier Nordic medieval scholarship. By involving political scientists and anthropologists working on ‘civil wars’ in a more contemporary setting, we will obtain insight into new approaches and theoretical perspectives on the nature of ‘civil wars’.

The Project is financed by The Research Council of Norway.