UiO Faculty of Humanities Department of Culture Studies and Oriental Languages
Main navigation
Back to uio.no
Sub navigation Menu
Research > Research news and events > Research news > 2020 > Islamists played a crucial role in the Arab Spring. Now they are labelled as terrorists
Norwegian version of this page 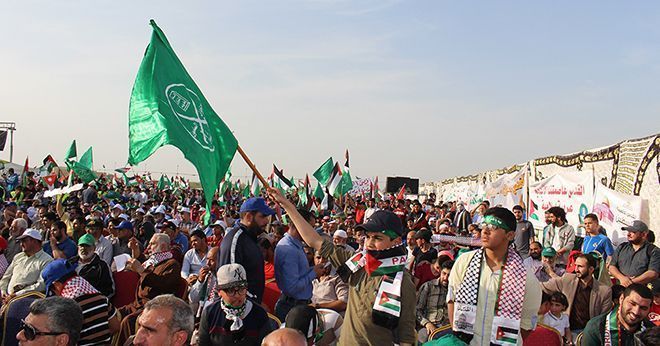 The Muslim Brotherhood and their supporters demonstrating for democracy during the Arab Spring of 2011.

In western media, Islamists are commonly conflated with the Islamic State (IS) and terrorism. However, these are only a small, radical part of the broader Islamist movement. It is less widely known that Islamism has been an important modernising force in the Arab world.

Professor of Middle East studies Bjørn Olav Utvik attempts to rectify this in his book on Islamism in the Middle East and North Africa, a new and updated edition of which is now being published.

“Islamists have played a central role in building civil society in the Middle East. This also means that they are now a vulnerable target group in the authoritarian counterrevolution that is currently taking place,” he explains.

Utvik, who is also head of the Department of Culture Studies and Oriental Languages (IKOS) at the University of Oslo, Norway, has been doing research on Islamism for decades. In this book, he traces lines from the beginnings of Islamism, via the modernisation of the Arab states, to the Arab Spring and right up to the present day.

In simple terms, Islamism is a movement that wants public and political life to be guided by Islamic principles. Bjørn Olav Utvik does research on the Middle East and North Africa, where Islamism originated and continues to be an important driving force.

“Islamism is closely linked to the modern breakthrough in the region, such as the emergence of an educated middle class and civil society. Islamists have pushed for education and healthcare, economic modernisation and entrepreneurship.”

Islamism is often linked to a collectivist mindset. Utvik stresses that Islamists attach great importance to the Muslim community, the ummah, but that they also promote individual accountability and rights. This is typical of societal modernisation.

“At the same time, Islamists want to protect the Islamic identity against Western influence,” he adds.

There are differences between Shiite Islamism and Sunni Islamism, and between different Islamist movements in different countries. Worldwide, almost 90 per cent of all Muslims are Sunni. Utvik identifies three main directions within Sunni Islamism:

Largely represented by the Muslim Brotherhood. This is the oldest Islamist organisation and has branches in many countries. The Brotherhood engages in politics and believes the people should choose their leaders.

More socially conservative and literal in their interpretation of the Quran. They have tended to stay out of politics, arguing that good Muslims must obey their ruling leader. Since 2011, several Salafist groups have started getting involved in politics.

Represented by IS and al-Qaeda, for example.Regard armed struggle against unbelievers and against apostate rulers as the only correct strategy. Similar to Salafists in their interpretation of Islam.

No Arab Spring without Islamism

Despite the fact that Islamists are often regarded as religious conservatives, Bjørn Olav Utvik stresses that Islamism must primarily be understood in the context of the modernisation of the Middle East.

“Islamists have played a key role in broad social movements. In many countries in the region, Islamism was the first organised mass movement.”

During the Arab Spring in 2011, citizens of almost every Arab country protested against their authoritarian rulers.

“The picture presented in the media was that liberal, left-leaning young people were taking to the streets in protest, and that Islamists then hijacked their uprising. However, this picture is misleading. The uprisings were led by young people, but many of them were Islamists,” Utvik explains.

He points out that many people joined forces and stood together across ideological lines.

“They wanted free elections, and to end government corruption and harassment of the people by the police, security forces and bureaucracy. People felt oppressed and hounded, and demanded respect.”

In some countries, the uprisings were followed by free elections. Islamist political parties won in several countries, including Egypt.

“The Islamists were a leading force in a civil society that rebelled. It was therefore only to be expected that the Islamists would have an important place in the political landscape, once it was opened up,” says Utvik.

Counterrevolution: “All Islamists are terrorists”

There are few remaining traces of the optimism of the Arab Spring in the Middle East today. The situation has changed radically for Islamists. From playing an important part in the freedom-seeking rebel movement, they are now persecuted and branded as terrorists by the authoritarian rulers.

“Western media report about regimes fighting against terrorism and IS. However, in reality a comprehensive suppression of oppositional forces is taking place under the guise of the fight against terrorism, with the Muslim Brotherhood taking the brunt of the blow,” says Utvik.

The authoritarian monarchies of the Persian Gulf region, such as Saudi Arabia and the United Arab Emirates, regarded the Arab Spring as a disaster. Islamists were depicted as the main enemy, and after a few years, a counterrevolution started.

“In Egypt, it was very concrete, because Mohammad Morsi from the Muslim Brotherhood was president. In the rest of the region, the attitude was also that the most expedient way to silence the calls for democracy and transparency would be by taking out the Islamists, because they were the main force behind the Arab Spring. One advantage was that the authoritarian forces could prey upon pre-existing tensions between Islamists and more secular, liberal and left-wing movements.”

In 2013, the military undertook a coup d’état in Egypt. Along with the Gulf monarchies, this regime is a central player in what Utvik calls the return of authoritarianism, where Islamists are the main enemy.

“They have branded the Muslim Brotherhood as a terrorist organisation, outlawed them and imprisoned them. There is widespread repression of human rights, especially in Egypt, and without any reaction from Western authorities or public opinion.”

One of the reasons for this, in Utvik’s opinion, is Western authorities’ belief that authoritarian regimes provide stability and peace.

“They thus accept that these regimes lump all Islamists together with IS and terrorism.”

The same thing happened in the wake of the terrorist attacks on 11 September 2001. Mubarak who was president in Egypt at the time, and other Middle Eastern leaders supported the United States in the fight against al-Qaeda, but also put peaceful Islamists in the same box.

“This has increased since the Arab Spring, and not least the civil war in Syria, where IS has flourished,” says Utvik.

The fight for women’s rights is coming

Bjørn Olav Utvik is concerned about the misleading narrative that all Islamists are terrorists. However, he makes no attempt to hide that the movement has a patriarchal, conservative side.

“There are tensions between the modernising forces on the one hand and more conservative elements on the other, especially in terms of views on women’s position in society,” he says.

The countries of the Middle East and North Africa have strong patriarchal traditions. But things are changing. Even in countries such as Saudi Arabia and Iran, women have been overrepresented at universities for some time now, and women’s participation in the labour market is growing, although it is still low internationally.

“Islamists support full political rights for women and promote women’s access to education and increasingly also work. But they continue to maintain that the man is the head of the family, and regard families as the core of society. In this way, they are limiting women’s freedom.”

At the same time, female Islamists are starting to occupy important political positions. In Morocco and Tunisia, they are female ministers, members of parliament and mayors.

“To the extent that a historian can make predictions about the future, I am sure that we will see a women’s rights movement emerge in the region. It will be a challenge for Islamists to work out how to relate to it,” says Utvik.

“A more feminist interpretation of the sacred texts of Islam is being developed both outside and within the Islamist movements. But there are strong counterforces defending men’s power and privilege.”

Bjørn Olav Utvik is professor of Middle East studies and head of the Department of Culture Studies and Oriental Languages (IKOS) at the University of Oslo. Utvik has been researching the development of the Islamist movements in the Middle East and North Africa since 1990.